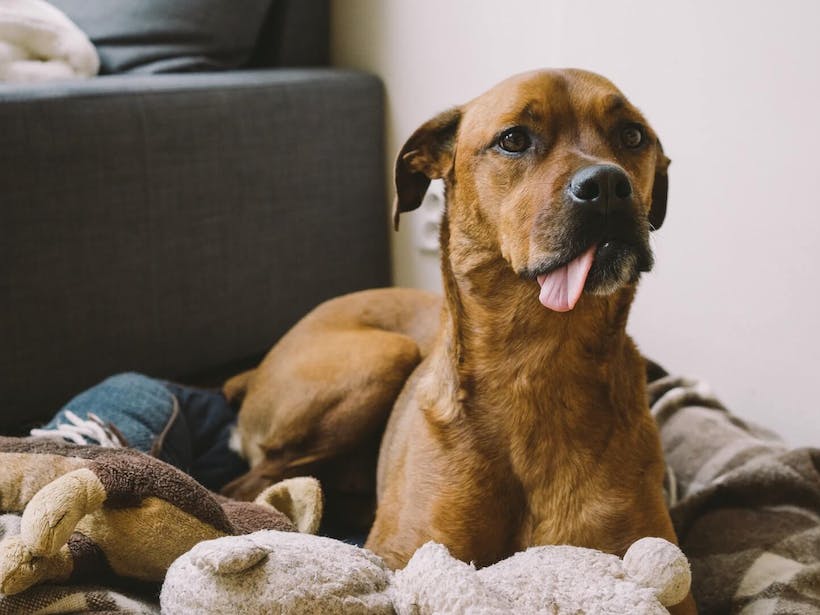 Have you ever wondered, “What breed is my dog?”

From satisfying your curiosity to better understanding your pet so you can provide tailored care, there are several benefits to figuring out which breeds make up your mystery mix.

Your veterinarian (or the shelter staff, if you adopted) may offer ideas about your pup’s ancestry. But when judging by visual cues alone, even experts misidentify a dog’s breed about 75% of the time.

So, in this post, you’ll learn four methods for discerning your doggo’s breed.

1. Compare your pup’s physical traits to other breeds.

When trying to figure out a dog’s breed, most people start by looking. Such an approach is rather straightforward and only requires a bit of time and research. But it’s certainly not the most accurate way to identify your pup’s breed.

After all, physical appearance can be misleading due to how dogs inherit traits. And that means even experts may guess wrong—as Dr. Angela Hughes did when predicting Toby’s breed mix in the video below.

If you’d like to try your hand at visual identification, make a list of your dog’s notable physical characteristics—also called “phenotype”—such as:

In general, you should prioritize clues in your dog’s shape (AKA, morphology) over their color or coat type because the former are a better reflection of your dog’s total ancestry. Colors and coat types, on the other hand, are the result of single genes. And when hundreds of breeds share the same coat color genes, guessing breeds gets a lot harder!

So, look at your dog’s head shape, tail carriage, and ear shape and size first. For example, does your pup have a:

One morphology “gotcha” to keep in mind:

A single gene causes short legs, and 40+ breeds (not just Dachshund, Pembroke Welsh Corgi, and Basset hound) carry it. For example, the Shih Tzu, Chihuahua, and Yorkshire Terrier often carry the trait. But most people don’t consider such breeds when they think “short legs.”

Besides the above, be sure to write down any unique features, as well as distinct personality traits and behaviors. Does your dog love water? Do they try to “herd” people and other animals? These are great clues!

Once you have your list, it’s time for some investigative work. Start searching online for dogs that match your pup. Once you’ve identified a few potential candidates, browse our breed library for dog facts and photos to learn more about them.

Guessing by looks alone can be fun, but it’s not foolproof. After all, some genetic traits are recessive, so your pup may not show visible signs of every ancestor.

Don’t have time for all the research required by the first approach? Online dog breed quizzes take most of the legwork out of visual identification. After answering a few simple questions about your dog’s appearance and traits, you’ll get a list of possible matches.

Like the option above, quizzes rely on visual cues. So, they probably won’t get the ancestry 100% right—especially if several breeds make up your mix. Still, they’re pretty fun to take.

Many quizzes like this exist. But as the world’s leading dog DNA service, we decided to make our own! It’s short—you just have to answer three questions about your dog’s ears, tail, and head shape.

There are a few free apps that use machine learning algorithms to predict a dog’s breed mix based on a photo. As a result, this option isn’t much more accurate than the previous two since figuring out breed based on looks alone can be tricky.

To give you an idea of how tricky, here’s a quick test: Which of the following dogs do you think has Border Collie in its recent ancestry?

The correct answer is #2. Did you guess right?

Let’s try again: Which of the following dogs have a Labrador Retriever as a close relative?

Believe it or not, the correct answer is #3. Not sure about you, but that would’ve been our last guess! And it likely would have stumped an algorithm, too.

Though far from perfect, breed identifier apps—like the quizzes—can yield amusing results. If you want to give this approach a shot, here’s an app we tried.

The methods above may be entertaining. But if you truly want to be confident about your pup’s breed make-up, there’s really only one choice: a dog DNA test. This option looks past your pup’s outward appearance and uses genetic clues to determine their ancestry.

For the highest accuracy, you’ll want a test with a sizable reference sample database. Why? Because DNA test algorithms compare submitted genetic samples against other samples in a database to determine the best match. So, a bigger pool of samples makes a test “smarter.” And that means more reliable results.

Using the largest dog breed database in the world, Wisdom Panel™ tests screen for 350+ breeds, types, and varieties. As a result, we can identify breeds that other services don’t even test for.

We also report breed mix down to 1%, trace ancestry back three generations, test for health conditions and traits, and more!

The best way to figure out your dog’s breed?

To demonstrate the differences between these four approaches, let’s use Koda, the pup pictured above, as an example.

Like most dog owners, Koda’s parents first used visual and behavioral cues to guess his breed background. They predicted he was a mix of:

Next Koda’s parents took the “What’s my dog?” quiz, which returned the following breed results:

As you can see, things are already getting a bit inconsistent! But wait—it gets better. The “Dog Scanner” app predicted Koda was a mix of:

As you can see, each of the visual identification methods guessed some breeds correctly. But they several missed others or even wrongly predicted a few.

However, the dog DNA test provided the most complete, most accurate picture of Koda’s breed background—allowing his parents to understand him better. Suddenly, it was clear where Koda’s protective tendencies came from (Akita, AmStaff). And his dense coat was no longer a mystery (Chow Chow, Akita, Husky).

Want to be sure about your dog’s breed mix?

Genetic testing reveals more than your dog’s breed. From identifying exercise needs to uncovering gene mutations, a DNA test equips you with the information you need to provide the best possible care for your pup.