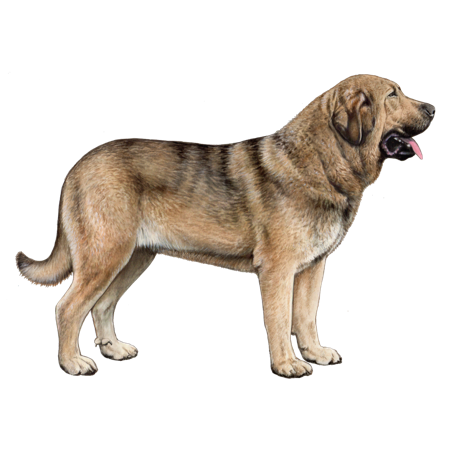 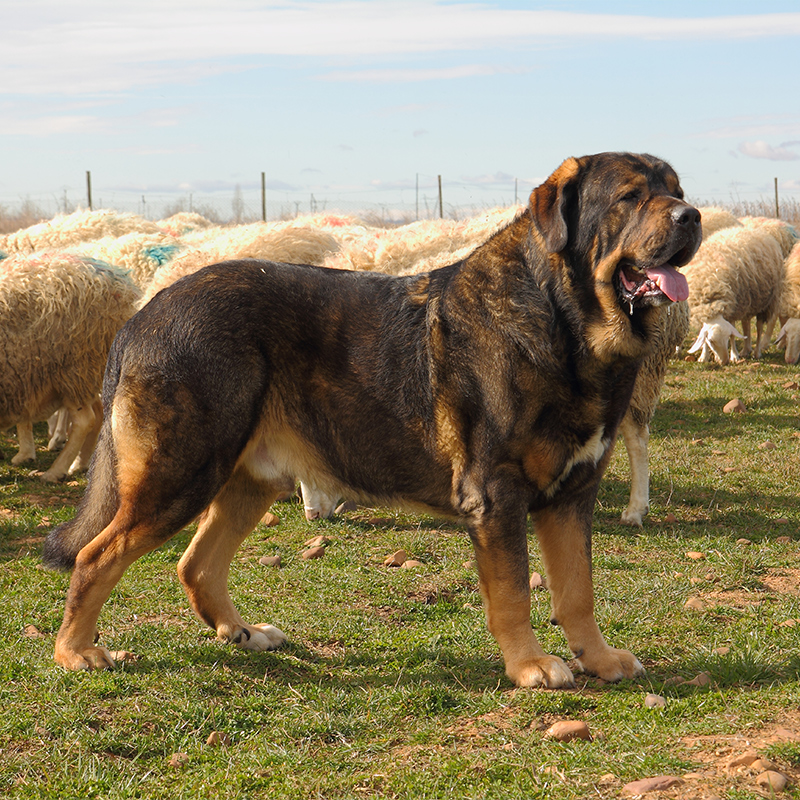 The Mastín Español, or Spanish Mastiff, is an ancient breed that the Greeks and Phoenicians brought to the Iberian Peninsula more than 2,000 years ago. Experts believe the Mastín Español is a direct descendant of the Hellenic Mastiff of Greece and an ancestor of European breeds—such as the Mastino Napoletano, Pyrenean Mastiff, and Great Pyrenees.

As the Spanish economy grew more dependent on wool production in the 10th century, shepherds relied on these massive dogs to protect flocks of sheep. And when Merino sheep came on the scene in the 12th century, Mastín Español accompanied the herds as they traveled from the south of Spain in the winter to the northern mountains in the summer.

The United Kennel Club recognized the breed in 2006, and the American Kennel club recorded it in their foundation stock service in 2008.

The Mastín Español is a giant breed with a compact, well-balanced appearance. These dogs have massive heads and powerful, muscular bodies.

Mastín Espanôl have semi-long, dense coats. The thick hair is shortest on the legs and longest and silkiest on the tail. The breed comes in various colors, with the most common being yellow, fawn red, or black. Coat patterns include brindle, particolor, or solid with white collars.

The Mastín Español has a large head with a broad skull and muzzle, small, dark hazel eyes, and medium-sized triangular ears that hang flat. The breed's body is rectangular and stocky, with a deep, broad chest, and the thick tail, set moderately low, is long enough to reach the hock. When alert, Mastín Español raise their tails in saber fashion, but they never carry them curled over their backs. 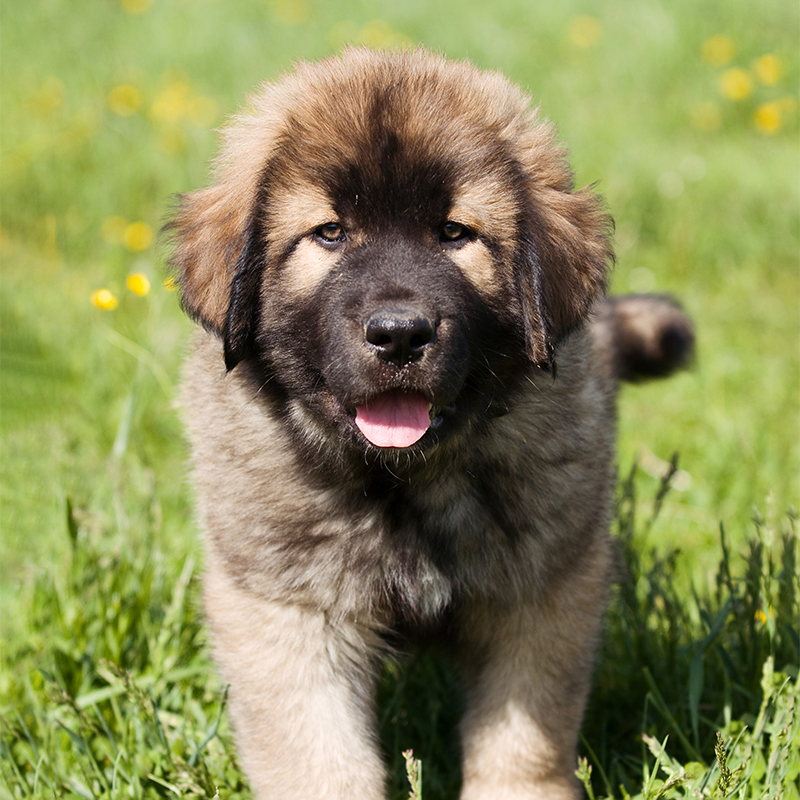 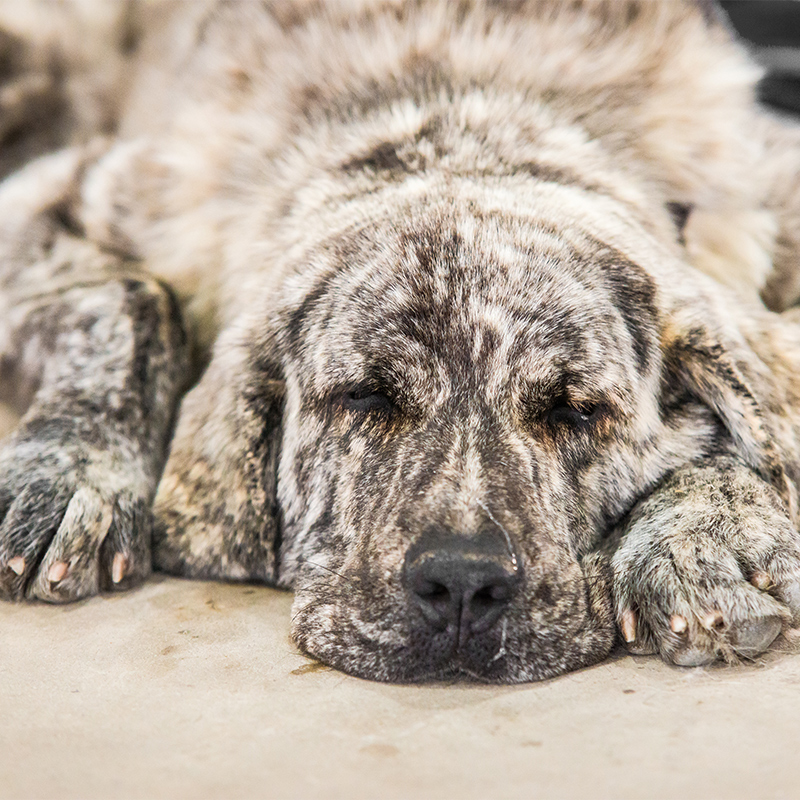 These gentle giants have a laid-back, calm personality and typically get along well with other animals and children. These qualities—combined with their affectionate, loyal nature—make them wonderful family pets.

Mastín Español are protective guard dogs by trade. They use a booming bark to let predators (or mail carriers) know they're around. Because of their watchful tendencies, these pups may be wary around strangers. But once they get to know someone, they usually warm up.

Due to their large size, Mastín Español aren't a great fit for apartment living. They can happily live in urban areas, however, provided they get outside daily to stretch their legs.

Mastín Español thrive on a high-quality food formulated for their life stage (e.g., puppy, adult, senior). They also benefit from diets made for large-breed dogs—particularly as puppies. This helps prevent them from growing too fast and developing hip dysplasia as they age.

Because of their deep chests, these dogs are at a greater risk of bloat (also known as twisted stomach). To help prevent bloat, break your dog's food up into several meals a day, and use a food bowl designed to slow their eating. Also, avoid feeding immediately before or after any kind of vigorous activity. These are just a few ways you can help prevent this life-threatening condition. Consult your veterinarian about other methods, including surgical options.

Lastly, to help your dog maintain a healthy weight, keep an eye on their food intake and measure out meals to avoid overfeeding. And remember, as a guideline, treats should make up no more than 10% of a dog's daily calories.

Mastín Español need weekly brushing to keep their thick coats clean and free of loose fur. When they blow their coats in the fall, more frequent brushing may be necessary. Nail trims and ear cleanings should also be part of your pup's standard care. To keep dental disease (and bad breath) at bay, establish a good dental hygiene program that includes professional cleanings and regular at-home teeth brushing.

Though this breed is relatively calm, they do need daily exercise to stay physically and mentally fit. Leashed walks, backyard play sessions, ball chasing, and hikes are all great options.

The Mastín Español is an intelligent, confident breed. Once you've earned their respect and established yourself as the pack leader, these dogs are very trainable. A firm but patient training approach using favorite treats as rewards works well for this breed. It's also important to socialize your Mastín Español when they're a puppy. Getting them accustomed to different people and environments when they're smaller and more manageable will help them grow into a well-mannered adult dog. 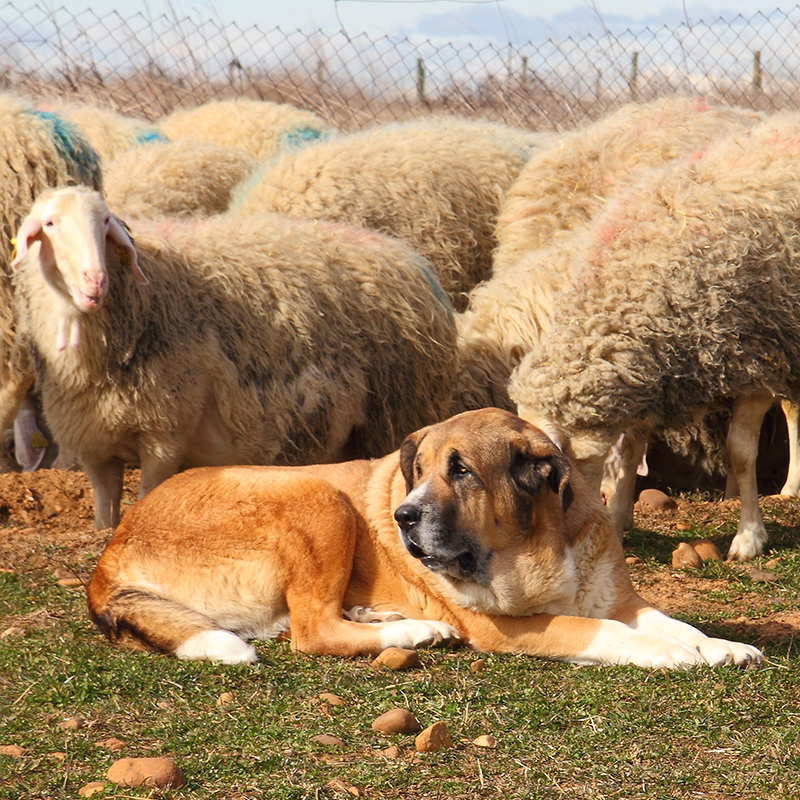