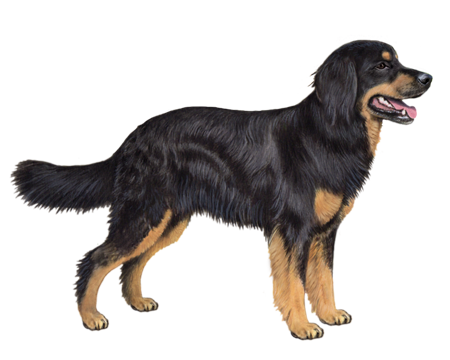 The Hovawart is a strong-willed, faithful, and intelligent breed. Developed to watch over homes and livestock in Germany, Hovawarts make outstanding guards and search and rescue dogs.

The Hovawart dates as far back as the Middle Ages. The origins of the breed's name—"hova" for yard or farm, and "wart" for watchman—explain the breed's main job: guardianship over the flocks, castles, and farms of the German barons. Though highly valued throughout medieval times, the Hovawart breed later faced near-extinction twice.

In the early 1900s, the Hovawart began to lose its popularity to breeds like the German Shepherd. But in 1922, breeders in the German Harz Mountains formed a Hovawart club and set out to reconstruct the breed. Led by zoologist Kurt Friedrich König, the club cross-bred the remaining Hovawarts with other working breeds. These included the German Shepherd, Leonberger, Newfoundland, and Kuvasz.

In 1937, the Hovawart received official recognition from the German Kennel Club. But the breed's reconstruction effort suffered the effects of World War II. Many of the Hovawarts joined the German war effort, and only a few remained after 1945.

Fortunately, breed enthusiasts rallied again to recreate the breed, forming the German Hovawart Club. Though still rare in most parts of the world, the Hovawart is a popular working dog in Germany and the Scandinavian countries. The breed first appeared in the UK in 1980 and now holds full AKC recognition.

The Hovawart's long-haired, dense coat is lightly waved—with only a slight undercoat—and longer on the chest, belly, back of legs, and tail.

Hovawarts come in three color variations: black with tan points (known as black and gold), black, or blond (a golden color similar to a Golden Retriever). According to the breed standard, the coat of blond dogs should become lighter on the legs and belly. It may have small white areas on the chest or single white hairs on the toes or tips of the tail.

The Hovawart has triangular drop ears set high and wide apart, giving the optical illusion of a broad skull. The breed's bushy tail extends past the hocks, but not all the way to the ground. 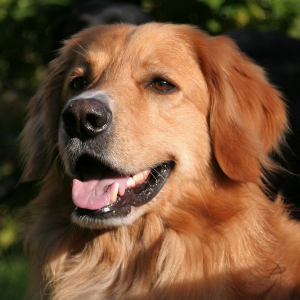 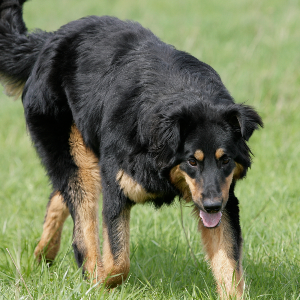 Hovawarts are affectionate, trustworthy, and obedient. They're also highly intelligent but can be stubborn and strong-willed. As such, Hovawarts require significant time and attention. But they make excellent companions for experienced owners.

Because they originated as working dogs, Hovawarts like to have a job to do. If they get bored, they may take it upon themselves to find something (undesirable) to do to keep busy.

Hovawarts may be reserved with strangers. This quality, along with their protective nature, makes them excellent watchdogs.

To keep your Hovawart at a healthy weight, monitor their food intake carefully. It's a good idea to use a measuring cup when portioning out their meals to avoid accidental overfeeding. And don't forget to count calories from treats in their daily totals. As a guideline, treats should make up no more than 10% of a dog's calories.

Most of the year, occasional brushing is enough to keep the Hovawart's coat in good shape. More frequent brushing during periods of seasonal shedding will keep the dog's coats free of loose hair.

The Hovawart's nails grow fast. Trim them regularly to keep them from cracking or splitting. Overgrown nails can lead to pain or trouble walking or running.

Hovawarts are large, active dogs that need plenty of room for their daily exercise. A large fenced yard is ideal, as it provides ample space for the big breed to run and play. Long walks, hikes, and trips to the dog park are other great ways for Hovawarts to burn off energy. They also enjoy activities such as search and rescue and tracking.

Hovawarts have strong guarding instincts and need training to help them understand the appropriate use of this behavior. Early socialization, in particular, can help you curb your dog's natural guarding tendencies.

Hovawarts can also be strong-willed and stubborn. Consistency, patience, and positive reinforcement are the best ways to build and sustain trust during training sessions. 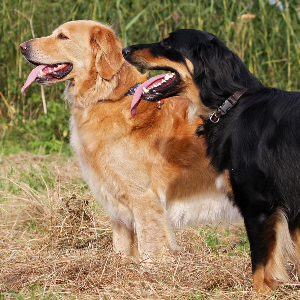