Beagles are loyal dogs that enjoy plenty of physical exercise. They're a very happy breed by nature—gentle, affectionate, and playful. And with their keen noses, Beagles never meet a scent they don't want to follow. 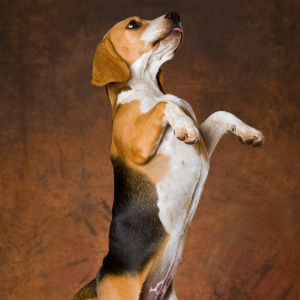 A long-established breed, the Beagle descends from the Foxhound, the Harrier, and the Kerry Beagle.

The first known reference to the breed name was in 1475, though its origins have long been debated. Some people think the name comes from the Celtic word "beag," which means "small." The French word "begle," which means "useless or of little value," could also be the inspiration. But it's hard to imagine a Beagle being associated with uselessness, given their frequent service as enthusiastic and skilled hunters.

Historically, Beagles have been most commonly used for hunting rabbit, quail, and pheasant—often working in packs. And with more than 200 million scent receptors in their nose, they've understandably been employed for police work. In more recent years, they've enjoyed jobs as termite and mold detection dogs.

While they have a long history as hunting and working dogs, nowadays Beagles also make excellent family dogs.

The Beagle came to the United States in the 1860s and earned AKC recognition in 1885. Today, it holds a spot on the list of top 10 dog breeds in the U.S.

Beagles are alert and determined hounds. They have sturdy, compact builds and come in two varieties: one does not exceed 13 inches in height, and the other is between 13-15 inches in height.

The Beagle's coat is short, dense, and suitable for all weather conditions.

Beagles have been bred mostly for form and hunting ability, and any hound color is permitted on their coats. As such, Beagles come in a variety of blacks, tans, browns, reds, and blue (a silver color), and may be ticked (mottled with white), have white markings, or be white with colored spots.

Beagles have long ears with rounded tips. When drawn out, they reach almost to the end of the nose.

Their skulls are long, slightly domed, and broad. A Beagle's dark brown or hazel eyes often give a pleading expression.

Beagles have well-balanced bodies that are short in couplings (meaning, the space between their last rib and their pelvis is relatively short). Their tails are sturdy and moderately long, set high but not curled over the back. 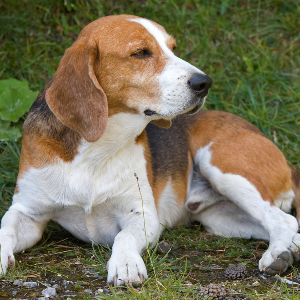 Due to their happy, gentle nature, Beagles are a great breed for families. They are usually very friendly towards children, strangers, and other dogs. However, they can be unpredictable with other pets.

Beagles are known for their musical barking and baying, and they do like to show off their vocal skills. This tendency to bark can make them a challenging dog to have in apartments, as neighbors may not appreciate their vocal talents.

Since they were bred to hunt in packs, they enjoy being around others. They also like a lot of attention and want to be included in family activities. A Beagle that's left alone for too long may start to exhibit undesirable behaviors, such as nuisance barking or digging.

Beagles are curious and active by nature, and—as scent dogs that like to follow their noses—they have the tendency to roam. A fully-fenced yard will help keep them out of harm's way. When out and about, they should be leashed, so they don't wander off.

To meet their nutritional needs, you should feed Beagles a high-quality food that's appropriate for their life stage (e.g., puppy, adult, or senior). Diets formulated for medium-sized dogs, or those created specifically for Beagles, are great options to consider.

Beagles love to eat, which puts them at risk for obesity. To keep their weight in a healthy range, you should closely monitor their food intake—including treats. As a general guideline, treats should make up no more than 10% of their daily calorie intake.

Beagles are average shedders. Their coats should be brushed once a week to remove loose or dead hair. Bathing is needed only occasionally (unless one of their adventures causes them to get into something messy or smelly).

You should trim a Beagle's nails as often as necessary to keep them short. Overly long nails can cause not only pain but also running or walking problems.

All dogs require regular dental care, including at-home teeth brushing and professional dental cleanings, and Beagles are no exception. Maintaining good dental hygiene is important for their overall long-term health, and the sooner you get them into a good dental care routine, the better.

Beagles are active and energetic dogs, and they should get at least an hour of exercise a day. In addition to walks and jogs, Beagles tend to do well in dog parks.

These athletic dogs enjoy dog sports such as tracking, hunting, agility, rally, and competitive obedience. And they always appreciate an opportunity to exercise their noses while on extended walks.

Beagles learn quickly, but their independent nature and tendency to get distracted can make them challenging to train. They are, however, commonly quite food-motivated and respond well to reward-based training involving treats. When treats aren't an option, use a favorite toy to reward desired behaviors.

Knowing if your Beagle is a carrier or at-risk for these conditions can help you and your veterinarian plan for your pup’s lifelong care. With Wisdom Panel™ Premium, you can get results for over 200 genetic health tests.