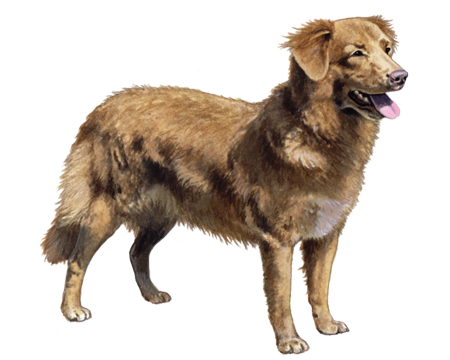 The Nova Scotia Duck Tolling Retriever is a happy, active, and intelligent breed. These foxy red dogs love hunting, playing, and—provided they've had enough exercise—lounging on the couch with their favorite humans. 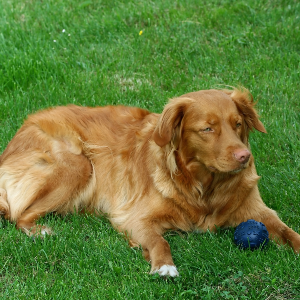 You might be able to guess the origin of the Nova Scotia Duck Tolling Retriever based on the breed's name. Developed as gundogs in Nova Scotia, Canada, in the 19th century, these pups have a unique hunting style. Unlike traditional retrievers, Nova Scotia Duck Tolling Retrievers don't wait for birds to fall after being shot. Instead, they toll (a Middle English word meaning "entice") offshore birds to within gun range.

Here's how: The hunter tosses a ball or stick into the water and stays hidden in the blind while the dog retrieves it. As the dog plays and splashes near the water, nearby waterfowl become intrigued by the motion and white markings on the dog's red coat. Once they swim over for a closer look and are in range, the hunter calls the dog back and stands up, causing the birds to fly. Then, after the hunter takes his shots, the dog retrieves the downed ducks from the water.

No one knows exactly which breeds combined to form the Nova Scotia Duck Tolling Retriever. But experts believe the Cocker Spaniel, Golden Retriever, and/or Irish Setter were likely part of the mix.

Nova Scotia Duck Tolling Retrievers came to the United States, Europe, and Australia during the 1960s. When the American Kennel Club recognized the breed in 2003, it became the club's longest-named breed. To avoid the mouthful, many people refer to them simply as "Tollers."

The smallest of the retriever breeds, Nova Scotia Duck Tolling Retrievers are powerful, compact, balanced dogs that give the appearance of strength and agility.

The Nova Scotia Duck Tolling Retriever has a medium-length, water-repellent double coat that protects it from icy cold water while retrieving.

The Toller's coat can be any shade of red—including golden red, dark copper, buff, and fawn. Lighter shading may appear in the coat's feathering. A white chest blaze or other white markings on the tail, muzzle, or feet also show up in this breed. This color combination gives Tollers the fox-like appearance that helps attract curious ducks during hunting expeditions.

Nova Scotia Duck Tolling Retrievers seem to have a sad or worried look on their faces when they're not working. But that all changes when they spring into action to retrieve. Then, their expression shifts to one of concentration and excitement.

Carried in a high curve, the Toller's well-feathered tail is constantly in motion when the dog is alert and working. 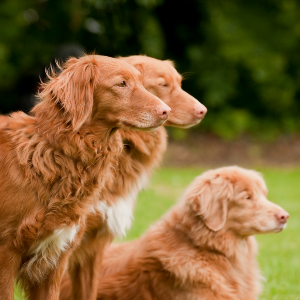 Nova Scotia Duck Tolling Retrievers are energetic, playful, and smart dogs that do well as members of active, outdoorsy families.

Tollers are friendly with kids but often wary or reserved around people they don't know. Because of this wariness, they're unlikely to stand up to strangers and therefore don't tend to make good guard dogs.

Thanks to their hunting and retrieving background, Tollers have a strong prey drive and like to chase other animals. Homes with cats or other pets that won't appreciate this (usually harmless) game may not be a good fit for this breed.

An excited Toller is often a loud Toller. These pups have a high-pitched bark (more of a scream, really) that is piercing and frantic. Teaching a Nova Scotia Duck Tolling Retriever not to be vocal requires patience and persistence. Early socialization can help.

All dogs are at risk for obesity if they eat too many calories. Avoid accidental overfeeding by measuring out meals. And be sure to consider calories from treats when calculating their daily intake. As a general guideline, treats should make up no more than 10% of a dog's calories.

For most of the year, Nova Scotia Duck Tolling Retrievers need only weekly brushing to stay looking their best. But during shedding periods (when they blow their coats), they require more frequent grooming.

It's important to trim a Toller's nails regularly, as long nails can cause pain or walking issues. And maintaining good dental hygiene is essential for any dog's overall long-term health. Aim to establish an at-home routine that includes regular teeth brushing and dental chews or toys, and talk with your veterinarian about professional dental cleanings.

Nova Scotia Duck Tolling Retrievers are tireless dogs that need a lot of daily exercise to be happy. They enjoy all the usual dog sports such as flyball, hunt and field trials, agility, tracking, and obedience. These activities provide a physical outlet for their energy and a mental work out.

Nova Scotia Duck Tolling Retrievers are incredibly smart and relatively easy to train. However, a firm (but gentle) approach is usually required. If Tollers sense that their humans aren't in charge of the household, they will happily take on the role.

Tollers tend to be food-motivated. So, favorite treats make for compelling rewards during training sessions. But keep in mind, this breed is sometimes easily distracted. So, keep training sessions short or varied. 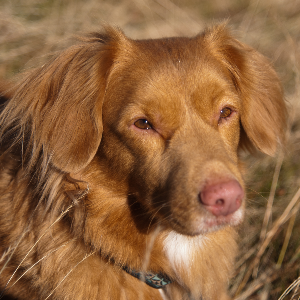 Knowing if your Nova Scotia Duck Tolling Retriever is a carrier or at-risk for these conditions can help you and your veterinarian plan for your pup's lifelong care. With Wisdom Panel™ Premium, you can get results for over 200 genetic health tests.