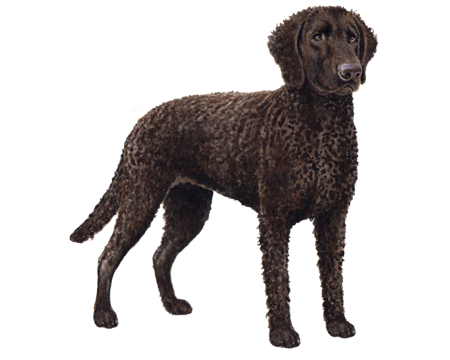 The Curly-Coated Retriever is a highly intelligent, alert, and friendly dog—as well as a devoted family member. This breed tends to be independent and less needy compared to others in the retriever family. 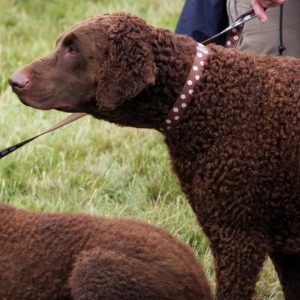 The exact lineage of the breed is unconfirmed. But most experts believe the Curly-Coated Retriever descended from the Close-Curled English Water Dog, the St. John's Newfoundland, and the Old Water Spaniel.

With its distinctive coat of dense, tight curls, the Curly earned a reputation as a tireless, versatile hunting companion capable of working in even the harshest of weather conditions. Often owned by British gamekeepers and poachers rather than aristocrats, this breed earned the nickname of "blue-collar" retriever.

Though the breed's popularity decreased in England, it increased in Australia and New Zealand. The Curly-Coated Retriever came to the United States in 1907, and the AKC recognized the breed in 1924.

The Curly-Coated Retriever is a large, sturdy dog best known for its characteristic coat made of small, tight curls.

The Curly's dense mass of tight curls lie close to the skin and offer protection from icy water and thorny shrubs. These curls cover most of the dog's body, but its face and front of its legs remain straight-haired.

The Curly-Coated Retriever comes in black or a dark liver. A few white hairs on the chest are allowed by the breed standards. But a full white patch is considered undesirable.

Curlies have tapered, wedge-shaped heads—a feature that distinguishes them from all other retriever breeds. Their ears are small, set on a line slightly above the corner of the eye, close to the head. The curls on their ears may be looser than on the rest of their body.

Curly-Coated Retrievers have straight or relatively straight tails that reach almost to the hock. And they're covered in the trademark curls. 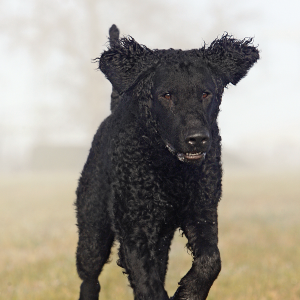 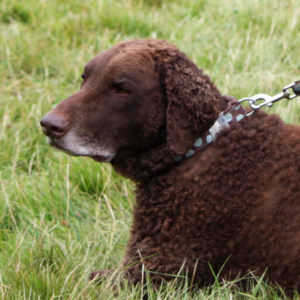 Curly-Coated Retrievers need lots of attention and frequent exercise. For these reasons, a Curly should be part of an active family, preferably one that can provide plenty of outdoor space for them to run and play. (So, apartment living is not a good fit for a Curly.)

These charming, gentle, and affectionate family dogs are friendly towards children and other pets. But they may be aloof or suspicious of strangers. This quality makes them better watchdogs than other, more outgoing retrievers.

Curlies don't reach maturity until they're three years old. That means their "puppy phase" will go on longer than with other breeds.

Curly-Coated Retrievers need high-quality food that's appropriate for their life stage (puppy, adult, or senior). To prevent them from becoming overweight or obese, monitor their food and treats carefully. As a guideline, treats should make up no more than 10% of their daily calories.

Curly-Coated Retrievers require only minimal grooming. Brushing tends to cause their curls to frizz, so many Curly owners choose instead to wet them down and let their coats air-dry. During their shedding season, you may need to use a metal-pronged grooming tool to remove dead hair.

Though nails will wear down with activity, they'll likely still need regular trims to stay at an ideal length. Nails that get too long can lead to pain or issues with walking or running.

All dogs need ongoing dental care, including at-home teeth brushing and professional dental cleanings. Maintaining good dental hygiene is essential for their overall long-term health. The sooner you get your dog into a good dental care routine, the better.

True to their sporting dog background, Curly-Coated Retrievers need a lot of daily exercise. A bored or pent-up Curly may turn to undesirable behaviors to release energy or entertain themselves. Luckily, they enjoy plenty of physical activities, including hunting, tracking, field trials, agility, retrieving, rally, and competitive obedience.

Curly-Coated Retrievers also love swimming and being outdoors in general—making them ideal jogging and hiking companions.

Curlies respond well to reward-based training. This can be helpful when training them to release inappropriate items that they've retrieved (a common occurrence for any retriever). Simply offer a favorite treat or toy in exchange for whatever it is that they've found.

Because they're slow to mature, Curly-Coated Retrievers may take longer to train than other breeds. Make training sessions fun and engaging to keep their attention.

As all breeds do, Curly-Coated Retrievers require early socialization to help them develop into well-mannered adult dogs. 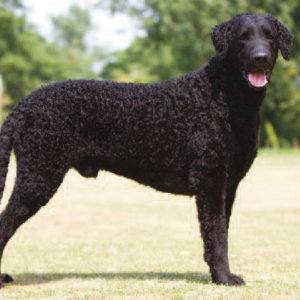 Knowing if your Curly-Coated Retriever is a carrier or at-risk for these conditions can help you and your veterinarian plan for your pup's lifelong care. With Wisdom Panel™ Premium, you can get results for over 200 genetic health tests.