Intelligent and obedient, the Barbet makes an excellent companion and family pet. Nicknamed “Mud Dog,” they enjoy playing in muddy, swampy areas. Owners of this breed have described them as quirky, goofy, clownish, and loving. 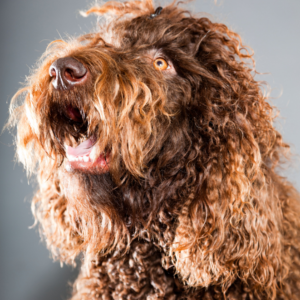 Also known as the French Water Dog, the Barbet’s name comes from “barbe,” the French word for “beard.”

The Barbet was originally bred as a sporting dog or gundog and used in the French wetlands to flush out and retrieve waterfowl. Several characteristics—including its soft mouth and long, protective coat—helped it excel as a hunting companion.

Though the first breed standard was created in 1894, the Barbet was mentioned in historical texts from the 16th century. Experts believe the Barbet was the progenitor of several other breeds, including the Bichon, Briard, Newfoundland, and Poodle.

Despite the popularity of the breed in its early years, the Barbet nearly became extinct during the World Wars. And some say that the modern-day Barbet is merely a re-creation of the breed. Interest in the breed picked up in the late 1900s, and a Barbet breed club formed in France in 1980.

The Barbet first came to the U.S. in 1994. And it earned full AKC recognition on January 1, 2020. The breed population is still relatively small, with an estimated 500 dogs in the U.S. Because of their long, curly hair, this rare breed is often mistaken for the more commonly seen Goldendoodle or Labradoodle.

The Barbet is a rustic, medium-sized breed of balanced proportions. They are known for their long, curly hair and distinct beard.

The Barbet has a thick, woolly coat that provides protection against cold and damp conditions. Its natural curls range from large and loose to tight and small.

The breed comes in a variety of colors, including all shades of black, gray, brown, and fawn. White spotting is acceptable, but not required by the breed standard.

Barbets have strong, broad heads that are proportionately large. In addition to the long, curly hair that covers their bodies, they have profuse beards and a mustache that entirely covers the bridge of the nose.

The Barbet’s ears are wide and are set at eye level. They reach at least to the corner of the mouth and are also covered with the trademark long hair. 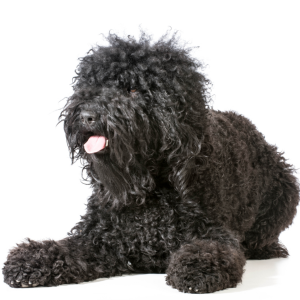 Barbets make excellent companions and family pets. These loyal dogs become very attached to their owners and are good with children.

As intelligent, obedient dogs that love to learn, Barbets may become bored without stimulation. Fortunately, this breed enjoys all kinds of activities. And when adequately exercised, Barbets can even make good apartment dogs.

With proper socialization, Barbets tend to get along well with other dogs and even cats. However, true to their sporting breed ways, they may be predisposed to chase small animals.

Barbets need a high-quality diet appropriate for their specific life stage (e.g., puppy, adult, senior). They don’t typically have big appetites. During drier summer months, they may benefit from having oil added to their diets. A consultation with a veterinarian is the best way to ensure nutritional needs are met.

Even though Barbets don’t tend to overeat, it’s still important to monitor food intake, as any dog can be at risk for obesity. To avoid accidental overfeeding, portion out their food using a standard measuring cup. And remember to account for treats when considering their daily calories—they should make up no more than 10% of a dog’s daily calories.

The Barbet’s shagginess is part of the breed’s signature look. To maintain the health of their curly coats, Barbets need frequent brushing and regular baths. Blow-drying their hair after a bath will straighten it out, making it easier to perform a full-body trim with scissors.

Barbets have strong, fast-growing nails that you should trim regularly. Overgrown nails can lead to pain or even problems running or walking.

As with all dogs, Barbets require regular dental care, including at-home teeth brushing and professional dental cleanings. Maintaining good dental hygiene is vital for their overall long-term health, and the sooner you get them into a good dental care routine, the better.

Barbets are often content to lounge on the couch with their people, but only if they get plenty of exercise beforehand. They love swimming, backyard play sessions, and chasing tennis balls. They also enjoy activities such as conformation, agility, dock diving, and disc dog.

Barbets can get overheated. For this reason, they don’t make good long-distance running companions. With their long coats, they’re much better equipped to handle the cold temperatures of winter.

Barbets respond best to positive reinforcement and an upbeat training environment. They are an obedient breed that benefits from a consistent training regime.