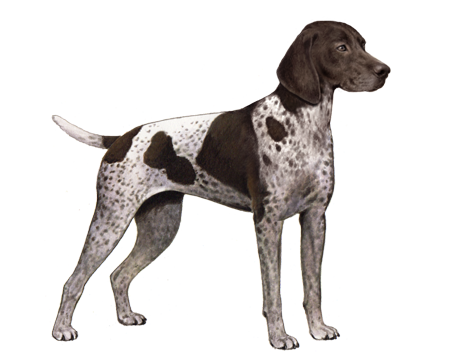 The German Shorthaired Pointer is an intelligent, good-natured, friendly breed. It makes an enthusiastic, versatile hunting companion as well as a happy, loyal pet for active families. 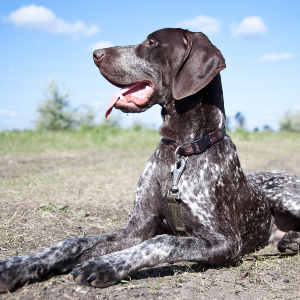 The German Shorthaired Pointer, or GSP, was developed in Germany in the late 19th century to meet the need for an all-round hunting dog. Breeders sought to develop an excellent pointer with a good nose—a dog that could retrieve birds as well as animals.

Initially, German hunters thought that a cross between a Spanish Pointer and Hannover Hound would possess these abilities. However, the resulting breed tended to bay when trailing. They then tried crosses with the Bloodhound, Foxhound, and various French hounds. But none hit the mark precisely.

Breeding with the English Pointer finally resulted in a dog that appeared perfect. Still, even this breed had an aversion to water and tracking at times. Fortunately, continuous breeding eliminated these unwanted traits. And the German Shorthaired Pointer became a lean, athletic, and responsive breed.

The German Kennel Club first registered the breed in 1872. German Shorthaired Pointers arrived in the United States in the 1920s. Impressed by the versatility of the breed after reading an article about it, a man named Charles R. Thornton shipped two dogs to his home in Missoula, Montana.

The American Kennel Club recognized the German Shorthaired Pointer as a breed in 1930. Today, it's consistently one of the top-winning breeds in competitive hunting events.

The German Shorthaired Pointer has an aristocratic and well-balanced look. The breed's overall structure suggests power, endurance, and agility.

The German Shorthaired Pointer's hair is thick and short, though slightly longer on the haunches and tail. The breed's coat is black, liver, or a combination of liver and white—including particolor, patched, and ticked.

German Shorthaired Pointers have long muzzles that allow them to seize game and carry it for long periods. Their eyes are medium-size, almond-shaped, and ideally dark brown. They're also very expressive, portraying intelligence, good-humor, and energy.

The breed's ears are broad and set fairly high, lying flat. They should extend to the corner of the mouth. 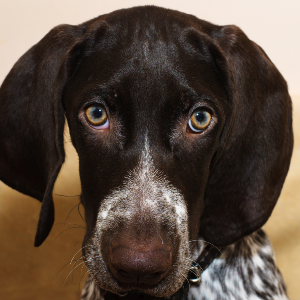 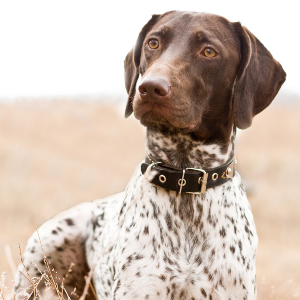 The German Shorthaired Pointer is an excellent breed for active, outdoorsy families. These loving, loyal, protective dogs tend to be friendly towards children. GSPs enjoy being around people and want nothing more than to be included in family life.

This breed is usually safe around other pets and dogs. But it's not uncommon for them to display dominant behavior. Because of their hunting instincts, they love to play and chase. However, GSPs may choose unwilling playmates, such as cats or wildlife.

German Shorthaired Pointers make commendable watch dogs. And though they may be reserved with strangers, they are generally very sociable dogs.

GSPs are an intelligent and highly energetic breed. They mature later than other breeds. The resulting elongated "puppy phase" can be challenging for some owners.

German Shorthaired Pointers need plenty of activity and exercise to be happy. If they get bored, they may take it upon themselves to find things to do, which can lead to undesired behaviors, such as barking or digging.

To meet their nutritional needs, feed your GSP a high-quality food appropriate for their life stage (e.g., puppy, adult, senior) and activity level.

German Shorthaired Pointers are prone to bloat (also known as twisted stomach). To help prevent this condition, don't feed your dog immediately after any kind of vigorous activity. And wait at least an hour after meals before allowing them to run or exercise.

To keep your dog at a healthy weight, monitor their food intake carefully. Avoid accidental overfeeding by measuring out meals. And don't forget to account for treats in their daily calorie totals. As a guideline, treats should make up no more than 10% of a dog's calories.

The German Shorthaired Pointer's grooming needs are relatively few. Most of the year, weekly brushing is all it takes to keep the breed's coat looking good. During periods of heavy shedding, your GSP will need frequent brushing to remove loose hairs and prevent them from ending up in unwanted places.

It's also smart to trim nails regularly to keep them short and tidy. Overgrown nails can split and become painful, or lead to issues walking or running.

In addition to professional dental cleanings, establish an at-home dental care routine that includes regular daily teeth brushing. Though that may seem ambitious, maintaining good dental hygiene is essential for the overall long-term health of all dogs.

German Shorthaired Pointers have a higher exercise requirement than most dogs. Long daily walks, running in enclosed yards, hiking, and swimming are all outdoor activities that they enjoy. But the ultimate way to a GSP's heart is retrieving, whether that involves a tennis ball or frisbee.

German Shorthaired Pointers are intelligent, extremely eager to please, and hard-working—qualities that make them easy to train. Consistent, firm training starting from an early age and positive reinforcement techniques are the best ways to train a GSP.

As all breeds do, German Shorthaired Pointers benefit fromEarly socialization. It helps them develop into well-adjusted adult dogs. 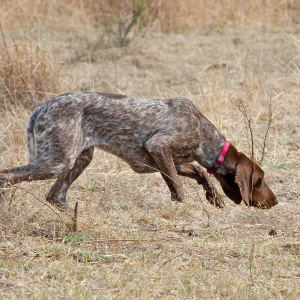 Knowing if your German Shorthaired Pointer is a carrier or at-risk for these conditions can help you and your veterinarian plan for your pup's lifelong care. With Wisdom Panel™ Premium, you can get results for over 200 genetic health tests.