There’s a lot more to dog shows than most people realize. In this introductory post, discover what goes on at these interesting events—and why. 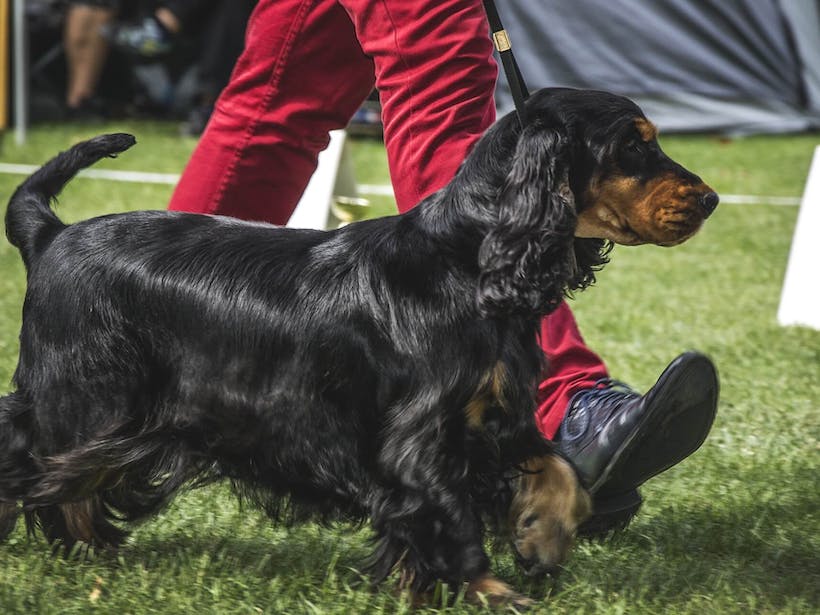 Have you ever wondered what a dog show is all about? Is it really like the movie Best in Show? Is it just a big doggy beauty contest?

Well, not exactly. Keep reading for a primer on how dog shows work.

How are dog shows judged?

Created in 1859, dog shows (also known as conformation shows) were actually designed to evaluate breeding stock and ensure the most conformationally correct dogs were used to develop future generations. This means the dogs that win are the ones the judges deem most representative of their breed standards.

Typically created by the parent club for the breed, breed standards are essentially descriptions of how the ideal dog should look. They specify the breed’s defining features—from coat type and color to body shape and size. And they can be quite long or short and to the point.

For example, the standard for the German Shepherd is three (very detailed) pages. But the American Staffordshire Terrier’s breed standard is barely more than half a page. Every breed has its own standard, which may vary slightly among show organizations—such as the AKC, UKC, and IABCA.

Can mixed breeds compete in dog shows? Since dog shows are ultimately about evaluation of breeding stock, most traditional organizations don’t allow mixed-breeds to compete in conformation events. But a few alternatives, such as the AKC’s Canine Partners™ Program, welcome any and every pup—from the Puggle to the Sheepadoodle. These events usually focus more on dog sports (e.g., agility, rally, obedience), as mixed breeds have no standard to follow.

Who gets to judge dog shows?

To be approved as an AKC dog show judge, you must be intimately familiar with the standard of each breed of dog you’re evaluating.

Judges gain such expertise through anatomy classes, hands-on judging workshops, breed tests, and breed interviews. Most judges also have previous experience as either a breeder, handler, or both—which isn’t too surprising given that you must be active in the dog show community for at least 12 years to qualify for the role.

After a would-be judge completes these prerequisites and submits an application to the AKC for each breed they want to judge, they receive permit status and must judge a breed three times under AKC supervision before requesting regular judging status.

How do you enter your dog in a show?

If you think your purebred pup is a good example of their breed standard, you can register them with a breed organization and start competing in conformation shows to earn them a Championship (CH) or even a Grand Championship (GCH) title.

The process is quite complex, but here’s a simplified overview:

When pups first start out, they’re known as class dogs—meaning they show in one of the classes made for dogs that have yet to earn Champion status. These include special puppy classes, which may be divided into a 6-12 month class and 12-18 month class or even four age-separated classes.

Other examples of show classes include Novice, Amateur Owner Handler, Bred by Exhibitor, American Bred, and Open. Keep in mind, not all dogs will qualify to show in every class. And it’s often best to enter a single class per dog.

During the show, the judge evaluates each class and gender individually. For instance, they look at the males in the 6-12 month class first, followed by those in the 12-18 month class, and so on. After that, they repeat the process for the females.

Once every class has its victor, all the winning males compete against each other, and the female winners do the same. This is the first time judges award any championship points, and each winner earns points based on how many other dogs they beat.

Note: Counting points can be extremely complicated, especially when you’re first starting out. The AKC publishes yearly point schedules that detail the number of points each winning dog earns based on region and breed. When a dog has reached 15 points—with at least two major wins (those of three to five points) under two different judges and at least one additional win awarded by a third judge—they receive their Championship title. Major wins may require beating as few as four dogs in rarer breeds or as many as 20 in common breeds, such as the Golden Retriever.

Step 3: Challenge the best of the best.

Next, the two winners return to the ring to compete against dogs that already have their CH titles for the honor of Best of Breed. During this competition, the judge awards Best of Breed, Best Opposite Sex, Select Dog, and Best of Winners. And the recipients of all these designations receive points toward their CH or GCH titles.

The dog that earns Best of Breed goes on to compete against the other winners from its designated group (e.g., herding, hound, sporting). Finally, the seven group winners compete for the coveted Best in Show title.

What’s the deal with the funny dog show hairdos?

You’ll see many different hairstyles in the show ring, as all dog breeds have unique grooming needs.

For short-coated breeds, such as the Boston Terrier and Rottweiler, a handler may only need to give the dog a quick bath and brushing before bringing them into the ring. But longer-coated breeds—including the Shetland Sheepdog and Havanese—require more preparation and grooming before the show. And some dogs have some grooming needs that, let’s face it, are a little unusual.

Take the Poodle’s distinctive trim, for example. Though you might find the haircut a bit strange, it’s actually related to the Poodle’s history as a sporting dog. Because these pups served as hunting retrievers and water dogs, the Poodle cut was designed to increase the breed’s underwater agility while protecting the hips and other important joints.

The AKC requires Poodles to be shown with one of four clips: the Puppy clip (only for dogs under 12 months), the English Saddle, the Continental, and the Sporting clip (only for certain classes).

The Komondor, Bergamasco, and Puli have another interesting type of ring fashion: thick, corded coats reminiscent of dreadlocks. Such coats helped protect the dogs from the harsh climates of their native countries.

Though cute, this style is not easy to care for. Baths can take hours because shampoo has trouble penetrating the cords. And drying takes even longer (up to 48 hours to air dry). But it’s important—not drying these unique coats thoroughly can lead to mold growth. And nobody wants a moldy dog!

Do dog show ring routines have any rhyme or reason?

You may notice small differences in ring traditions among breeds, such as the use of tables, ramps, or varied gaiting speeds and styles. A few breeds, in particular, stand out for their unusual ring procedures.

One of these is the German Shepherd. Handlers show this popular dog on a loose, 15-foot lead, gaited very quickly to show off the breed’s signature trotting gait and long stride. German Shepherds often also receive a temperament test when they first enter the ring. This test must be the first interaction between the dog and the judge—who walks over to the dog, looks at them (but doesn’t stare!), and pets them on the head. The German Shepherd must not show signs of timidity or aggression during this greeting.

Then, during the ring inspection, the handler stacks (or poses) the dog uniquely. Most breeds stack in a square or extended manner known as a four point stack. But German Shepherds stack with one hindlimb under the body and the other extended (a three point stack)—which is the reason for their distinctive posture and the appearance of a sloping topline.

Sparring is yet another novel ring practice. Judges may request sparring for certain terrier breeds and one non-terrier breed: the Chihuahua. If a judge asks two or more dogs to spar, they must face off in the center of the ring. They don’t ever come into contact, but they should display “terrier attitude”—meaning they puff out their chests, stand on their toes, and show the other dogs who’s boss!

To learn about the standards for hundreds of dog breeds, visit our breed library. You’ll also find information on breed history, temperament, grooming and nutrition needs, and more to help you know the best ways to care for your pup.

Get practical, DIY tips to keep your pup looking and smelling their best—no visit to the groomer necessary.

Dog obedience training: Why breed is the secret to success

When it comes to dog obedience training, it’s helpful to have an understanding of your pup’s breed(s) and natural tendencies.