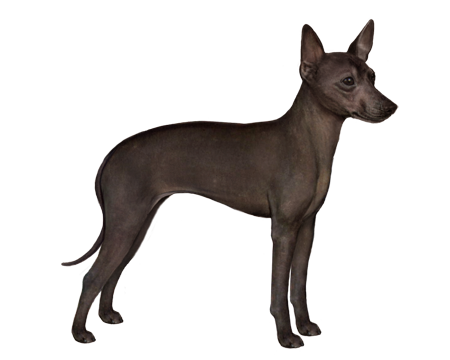 The Xoloitzcuintli (pronounced "show-low-eats-queent-lee") is one of the world's oldest breeds. These intelligent, alert, and loyal dogs make fine family pets. And don't worry—they have a nickname that's much easier to pronounce: Xolo (show-low). 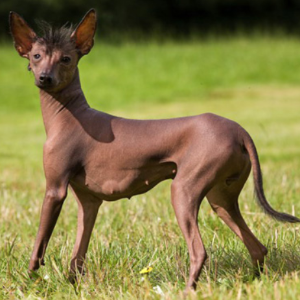 The Xoloitzcuintli is a breed from Mexico, dating back more than 3,000 years. The unique name comes from the Aztec god Xolotl and the Aztec name for dog, "Itzcuintli." Aztecs believed Xolos had magical powers, ranging from healing the sick to warding off evil spirits.

Have you ever heard the saying, "three dog night?" That's a reference to the Native American practice of sleeping among Xolos to keep warm. Due to their lack of an insulating hair coat, Xolos feel noticeably warm to the touch. So, people slept with one (or several) Xolos depending on the harshness of the weather.

Despite the existence of a short-coated variety, Xoloitzcuintlis are also called Mexican Hairless Dogs. Though one of the first breeds ever recognized by the American Kennel Club, Mexican Hairless Dogs lost popularity in the late 1950s. As a result, the AKC removed the breed's listing.

Fortunately, Xolos have since regained their popularity and recovered their AKC status in 2011. Xoloitzcuintlis are now growing in numbers, but they're still considered a rare breed.

The athletic Xoloitzcuintli has a blunt, wedge-shaped head and tapering muzzle. It also has a noticeable underjaw. Xolos come in three sizes: Toy, Miniature, and Standard.

Xolos come in coated and hairless varieties, the hairless being most popular. Hairless Xolos have smooth, tough skin and short, coarse hair on their heads, feet, and tips of their tails. Coated Xolos have short, flat hair covering their bodies. The breed has many color variants—including black, gray, liver, bronze, and red—all seen with or without spotting.

On the hairless Xolo, a lack of hair is the breed's distinguishing feature. But both varieties of Xolo have intelligent and thoughtful facial expressions. 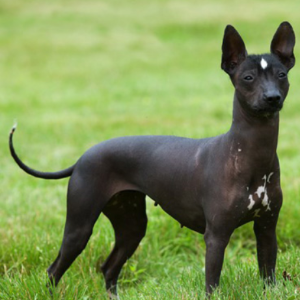 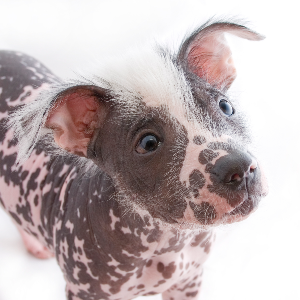 Calm and affectionate, the Xoloitzcuintli is a social breed that enjoys being part of family activities.

Both alert and territorial, the Xolo is often protective of its people. This breed may also seem aloof with strangers, making it an excellent guard or watchdog.

Given its preference to stay close to home, there is little risk that a Xolo will run away.

The Xoloitzcuintli needs high-quality, age-appropriate dog food. All dogs run the risk of obesity if they eat too many calories. So, keep an eye on how much your Xolo eats and reduce portions if your pup gains weight. Also, remember that giving too many treats in addition to regular meals can lead to weight gain.

Hairless Xoloitzcuintlis generally requires minimal grooming as adults. They can, however, get acne as adolescents. So, their skin may need special care at that age. The Hairless Xolo also needs sunscreen to protect its exposed skin when outdoors.

The coated variety of the Xolo is easy to care for. An ideal grooming routine includes a weekly brushing, regular nail trims, and the occasional bath.

Adult Xolos are typically calm—satisfied with long walks or playtime in the yard for exercise. However, Xoloitzcuintli puppies need considerably more activity to thrive.

The Xolo is an intelligent breed and easy to train, provided you follow a consistent regimen and define boundaries. Xoloitzcuintlis need a strong owner to act as the pack leader.

Also, early socialization and puppy training classes are a must for all dogs, including the Xolo. 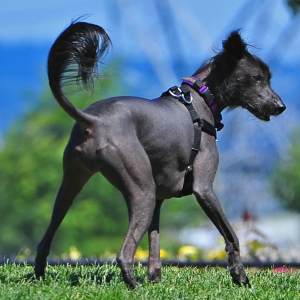