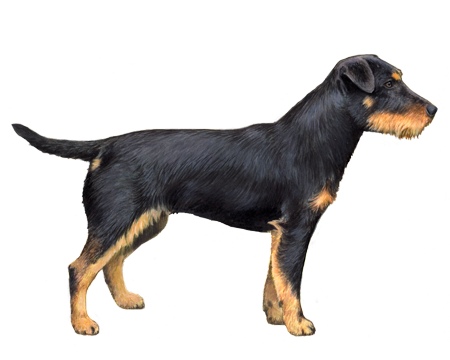 German Hunting Terriers are exceptional working dogs with fantastic drive and agility. They are fearless hunting companions and retrievers, capable of pursuing quarry both above and below ground. As a result, the German Hunting Terrier is one of the most popular terrier breeds used for hunting today. 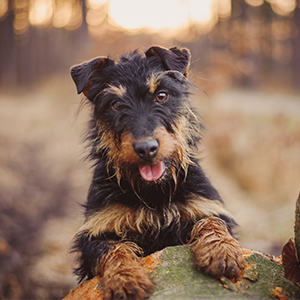 The German Hunting Terrier, also called the Jagdterrier, is a relatively new breed. Though small Black and Tan terriers existed in Germany as far back as the 18th century, this particular breed has only been around since the 1920s.

As the story goes, a group of Fox Terrier fans decided to abandon their investment in the English breed because they thought it was losing its hunting abilities. To develop a replacement, they began crossing suitable rough-coated English Fox Terriers, Welsh Terriers, and Old English "broken-haired" Terriers.

Though much documentation of this crossbreeding was lost during World War II, one thing is for sure: the German Hunting Terrier is a terrier breed through and through. In fact, as many as 10 additional terrier breeds likely contributed to the final breed at one time.

In the early days—thanks to the large number of contributing breeds—the German Hunting Terrier came in a wide variety of sizes and colorings. But eventually, breeders began selecting for a specific coat color alongside the preferred drive, tenacity, and health traits.

The United Kennel Club recognized the breed on January 1, 1993.

The German Hunting Terrier is a compact, well-proportioned hunting dog with a fiery expression.

A German Hunting Terrier's coat can be either wiry, smooth, or broken. Regardless of texture, it should be thick enough to protect the dog from briars, dampness, and cold weather. This breed is typically black and tan—with the tan being more rust-colored on the muzzle and undercarriage.

These dogs have long, wedge-shaped heads, V-shaped ears set high on the head, and small, dark eyes. Their deep, narrow chests allow them to enter the dens of prey with ease while hunting. 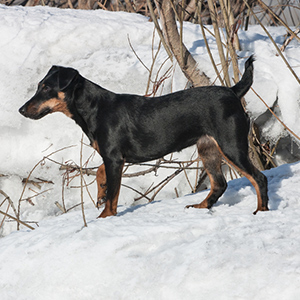 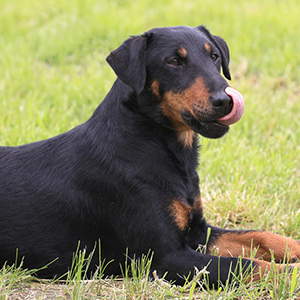 German Hunting Terriers are intelligent, energetic, and watchful dogs. Though usually friendly with people, they are—as their name suggests—dedicated hunters. As such, they aren't well-suited to be just housepets, and they may become restless without the opportunity to do what they do best: hunt and flush.

Typical of the terrier family, these pups are persistent workers with an independent nature. They are courageous, relentless hunters with an unending supply of energy.

German Hunting Terriers need a diet formulated for their specific life stage (e.g., puppy, adult, senior). Because of their size, these dogs require more calories per pound of body weight than larger dogs. Experts recommend a dog food formulated for small breeds. These diets have the appropriate blend of nutrients and a smaller kibble size that is easier for German Hunting Terriers to chew and digest.

All dogs can become overweight if they consume too many calories. It's important to monitor the amount of food your dog eats and keep treats to no more than 10% of their caloric intake. For a small dog like the German Hunting Terrier, even a couple of extra snacks can lead to weight gain.

Weekly brushing and the occasional bath are all that's needed to keep a German Hunting Terrier's coat clean. You should also regularly trim their fast-growing nails and clean their ears if you notice any wax or debris build-up. Lastly, they require a consistent dental hygiene program that includes at-home teeth brushing and professional dental cleanings.

German Hunting Terriers thrive when they receive plenty of exercise. Hunting is, of course, their preferred way to burn off energy. They also seem to enjoy playtime in a fenced backyard, long walks, and chasing balls. Dog sports—such as agility, competitive obedience, and rally—are other great ways to provide both physical and mental exercise.

This breed is usually eager to please and very easy to train. However, German Hunting Terriers have a typical terrier temperament, which means they can be headstrong and stubborn. So, a firm and consistent training approach works best. 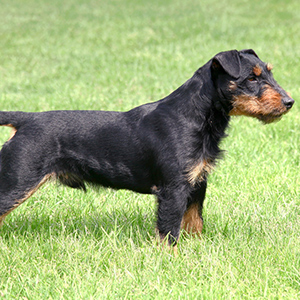 Knowing if your German Hunting Terrier is a carrier or at-risk for these conditions can help you and your veterinarian plan for your pup's lifelong care. With Wisdom Panel™ Premium, you can get results for over 200 genetic health tests.