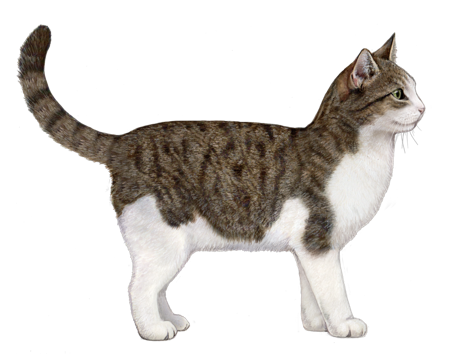 European Domestic cats are intelligent, independent felines that come in various shapes, colors, and sizes. But they share one thing in common: They're all easy to love.

Cats are among the most popular pets in the world, and Domestics are the most common type of cat. Often referred to as moggies, housecats, or alleycats, European Domestics descendants of random-bred cats.

Domestic cats likely originated in the Fertile Crescent region—an area that includes Western Asia, Turkey, and Egypt—about 10,000 years ago. As humans traded their nomadic lifestyle for a stationary one centered on agriculture, wild cats congregated near their settlements to prey upon rodents. Farmers appreciated the pest control, and cats were happy with the abundance of food. Thus, the human-cat relationship began.

Experts believe Greeks and Romans brought Domestic cats to Europe 3,000 years ago. But in the Middle Ages, cats became associated with witchcraft, and their numbers dwindled as a result. In the 1500s, after the plague decimated much of London's human population, cats regained popularity thanks to their rat-hunting prowess. European Domestics have been in the homes—and firmly in the hearts—of humans ever since.

Though Domestics aren't pedigreed cats, some cat associations allow them to compete in shows in a general "housecat" category.

European Domestics come in a wide range of colors, sizes, and builds. Still, they're typically medium-sized and muscular.

The coat of a Domestic cat comes in all colors, patterns, and lengths. Any coat combination that's genetically possible is on the table for this breed.

European Domestics aren't defined by a specific set of physical characteristics. The average Domestic may display any number of adorable features.

European Domestic cats' personalities are quite varied. They tend to be intelligent, independently minded, and able to take care of themselves. But they can be quiet or vocal, cuddly or aloof. Getting to know the quirks of a Domestic's personality is part of the fun of sharing a home with one.

Because of their background as rodent catchers, European Domestics are typically athletic and agile, with strong hunting instincts. Using feather toys and other items they can pounce on or chase gives them a much-needed outlet for their natural tendencies.

Domestics also tend to enjoy keeping an eye on the outside world. High perches where they can safely look out at birds and other wildlife will keep them entertained for hours.

Domestic cats thrive on a high-quality diet. Because nutritional needs vary for kittens, adults, and senior cats, choose a formula that's age-appropriate for your pet.

Obesity is a growing health concern for all cats. To keep calories in check, portion out meals using a standard measuring cup, and reduce amounts if your cat gains weight. And keep an eye on how many treats you're giving them. As a guideline, treats should make up no more than 10% of a cat's daily calories.

In addition to their meals, make sure to provide plenty of fresh, clean water for your cat.

European Domestics are excellent self-groomers. Still, they need regular brushing to keep their coats looking their best. Shorthaired cats can usually get by with weekly brushing using a rubber or steel comb. Longhaired cats are more prone to tangles and mats and may require daily brushing.

In addition to combing, trim their claws monthly to prevent overgrowth. Overgrown nails are more likely to snag on something, become torn or damaged, or even grow into the paw pads—leading to pain or infection. In addition to clipping, a scratching post will help keep your cat's nails in good shape and satisfy their instinct to scratch.

Roughly one out of every three cats in the United States is overweight or obese. Extra weight can contribute to other health risks, such as arthritis, diabetes, and heart problems. Your veterinarian is a great resource for tips on how to keep your cat at a healthy weight.