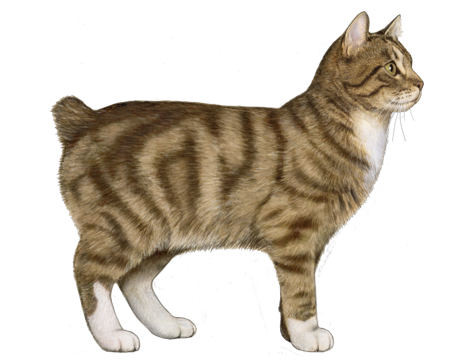 The Manx is best known for its lack of a tail, dog-like behaviors, and affectionate personality. These cats form tight bonds with their people and love to participate in all household activities.

The Manx is one of the oldest cat breeds in the world. Many intriguing stories surround its beginnings—including one that suggests the breed lost its tail when Noah accidentally slammed it in the door of the ark.

But experts believe the Manx emerged several hundred years ago from a population of shorthair cats on the Isle of Man in the Irish Sea. When a dominant genetic mutation began causing taillessness, the trait spread quickly among cats on the island.

Later, the Norwegian Forest Cat's ancestor was introduced to the island's cat population—resulting in a longhaired version of the Manx. Now known as a Cymric, these longhaired cats share the same breed standard as the Manx.

Though many people associate Manx with taillessness, some cats of the breed do have normal tails. If a Manx has a full-length tail, they’re called a "longie." If they have a nub or stump, they’re called a "stumpie." Completely tailless cats go by "rumpie," and rumpies with a rise of bone at the end of their spine are called "risers."

Manx were one of the original breeds represented in the first cat shows in England and one of the the Cat Fanciers Association founding breeds in 1906.

The Manx is a medium-sized breed with an overall round appearance. They are heavy, muscular cats with a well-balanced, compact structure.

Manx have a short, dense double coat. Their outer guard hairs have a somewhat hard texture and glossy appearance. They come in all coat colors and combinations and often display dramatic markings.

This breed has a large, round head and chubby cheeks. Manx medium ears are wide at the base and taper slightly to a point. The color of their round, full eyes corresponds with their coat color. Their back legs are much longer than their front legs, causing their rumps to be noticeably higher than their shoulders.

Manx are people-oriented cats that bond closely with their humans. They get along well with other pets and kids, making them an excellent addition to most families. Because they're so social, they don't like being left alone for long periods. But the company of another cat helps keep them from feeling lonely when no one else is around.

A clown-like personality is a trademark of this breed. Some Manx are even known to play practical jokes on their people. They're also quick studies and can learn to fetch or perform simple tricks. But they sometimes use their intelligence for their own purposes—such as figuring out how to open doors or cabinets if they feel something on the other side is worth the effort.

Manx are playful cats that enjoy puzzle toys, games of chase, and showing off their impressive high jumping abilities and high-speed racing moves. These natural hunters will also do an admirable job of keeping the house mouse-free.

Manx require a high-quality diet to meet their nutritional needs. Because those needs vary for kittens, adults, and senior cats, opt for a formula that's age-appropriate for your pet.

To keep your cat at a healthy weight, measure out meals and reduce portions if necessary. And remember to account for snacks—just one ounce of cheese can exceed up to half their recommended daily calories.

In addition to regular meals, easy access to fresh, clean water is essential for all cats.

The Manx's short coat needs minimal grooming. Brushing once a week is typically enough to keep it looking its best.

Monthly nail trims will help keep your cat's claws at an appropriate length. Nails that get too long are more likely to snag on something and become torn or damaged. And overgrown nails can even grow into their paw pads, leading to pain or infection. In addition to clipping, providing a scratching post will allow your cat to maintain their nails themselves (and satisfy their instinct to scratch).

Dental hygiene is another critical component of every cat's care. From a young age, start your Manx on a dental routine that includes at-home teeth brushing and professional exams and cleanings.

The genetic mutation that causes taillessness can also cause other health complications—including spinal cord or nerve damage, bladder or bowels problems, and digestive issues. Your veterinarian is your best resource for discussing these and other health concerns for your cat.