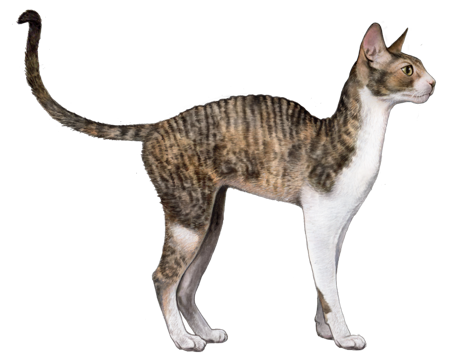 Cornish Rex are active, people-oriented cats with outgoing, playful personalities. A happy Cornish is one that's curled up next to (or, better yet, on) their favorite human.

The Cornish Rex originated in Cornwall, England, in 1950, when a cream-colored cat with a coat of tiny curls appeared in a litter of barn cats. Owner Nina Ennismore took the cat (named Kallibunker) to the veterinarian, who immediately knew Kalli was special.

Interest in the Cornish Rex took off in 1956 when Life magazine published an article about Kallibunker and one of his kittens. The following year, a breeder in California imported two Cornish cats. The male was sterile, but the female (who was bred to her father before being exported) gave birth to two curly cats. Those cats became the foundation for the Cornish Rex breed in North America.

To expand and strengthen the gene pool, breeders in the United States crossed the Cornish Rex with Siamese, Havana Browns, American Shorthairs, and Burmese. The CFA began registering the breed in 1962 and granted it Champion status two years later.

Cornish Rex are medium-sized cats with soft, wavy coats that make them resemble small lambs. They have strong muscle tone and a graceful, slender appearance.

The Cornish's coat is short, velvety, and relatively dense. It lies close to the body and has a uniform marcel wave that's most prominent on the back and sides. The hair on the chin, chest, and stomach is shorter and noticeably wavy. All coat color and pattern combinations are possible in this breed.

Cornish Rex thrive on social interactions. As such, they need to be in the thick of the action and surrounded by other pets or people. Their outgoing, enthusiastic nature makes them an excellent fit for busy families with kids. But their need for attention can sometimes make them demanding, and they don't do well when left alone for long periods.

These energetic cats keep their kitten-like playfulness their whole lives. They can turn any object into a toy, and their fetch skills would make many dogs jealous. Best of all, their goofy personality and acrobatic moves keep their humans entertained for hours.

Despite their active nature, Cornish make fantastic lap cats that love to cuddle with their humans.

Cornish Rex require a high-quality diet. Because nutritional needs vary for kittens, adults, and senior cats, opt for a formula that's age-appropriate for your pet.

Cornish love to eat. Left to their own devices, they would happily gobble up all food in sight (including any human food left unattended). To help your cat maintain a healthy weight, monitor their food intake closely. And don't forget to account for treats in their daily calorie totals. As a guideline, treats should make up no more than 10% of a cat's calories.

Besides regular meals, access to fresh, clean water is essential for any cat.

The Cornish's short, low-maintenance coat sheds minimally. As a result, people who typically experience cat allergies sometimes report milder symptoms when around a Cornish. Because of this, you might assume they are hypoallergenic. But the breed still produces the allergens that can trigger an allergic reaction.

Cornish's ears require regular cleaning to remove dirt and wax build-up. Monthly nail clipping is also a must. Nails that get too long are more likely to snag on something and become torn or damaged. Overgrown nails can also grow into your cat's paw pads, leading to pain or infection. In addition to clipping, providing a scratching post will help keep their nails in good shape and satisfy their instinct to scratch.

Roughly one out of every three cats in the United States is overweight or obese. And those extra pounds can contribute to other health risks, such as arthritis, diabetes, and heart problems. Your veterinarian is a great resource for tips on how to keep your cat at a healthy weight.