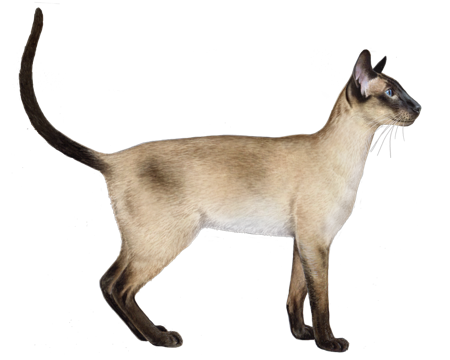 Siamese and Oriental Shorthairs both belong to the Siamese breed group. These playful, extroverted kitties love to be the center of attention. They're chatty cats that want nothing more than to follow their humans around and tell them all about their day.

Though legends abound, no one knows the exact origins of the Siamese breed. But cats fitting the description of Siamese appear in manuscripts dating back to the 12th century. Many experts believe these cats lived in palaces with the royalty of Siam (now Thailand).

Siamese cats were exported to England toward the end of the 19th century and appeared in the Crystal Palace Cat Show in 1871. The breed's American debut came eight years later—when the U.S. Consul from Bangkok gifted a Siamese to President Rutherford B. Hayes' wife.

As awareness of these beautiful cats spread, fanciers in the United States jumped on the chance to import them. The Siamese appeared in the Beresford Cat Club Stud Books in 1900 and was one of the inaugural breeds accepted by the Cat Fanciers Association in 1906.

By the 1930s, these fashionably colored cats had become American favorites. But quality suffered as breeders rushed to meet the demand, and the number of cats whose features strayed from the breed standard grew. Fortunately, breeders dedicated to the Siamese have successfully revived the ancient breed's original beauty.

Cat breeding saw a dramatic decline during World War II. As breeders started up again after the war, they experimented with unique crosses that yielded many modern cat breeds—including the Oriental Shorthair.

In the 1950s, breeders crossed Russian Blues, British Shorthairs, Abyssinians, and regular domestic cats with the Siamese. These litters were then bred with Siamese, which produced pointed and non-pointed kittens. In just a few generations, these cats were indistinguishable from the Siamese, except for their coloring. And the non-pointed cats from these breedings formed the foundation of the Oriental breed.

Siamese and Orientals are medium-sized cats known for their long, lean bodies and exquisitely refined appearance.

Siamese and Orientals Shorthairs have short, glossy coats that lie close to the body. As pointed cats, Siamese have lighter-colored bodies and darker colors on their face, legs, tail, and ears. The light-colored hair on their bodies usually darkens with age. Still, there is always a strong contrast between body color and points. Points on the mask, ears, legs, feet, and tail are dense, clearly defined, and all the same shade.

Siamese and Orientals have long, tapering wedge-shaped heads and flat skulls. Their massive, pointed ears are wide at the base. And they have a long, straight nose and a wedge-shaped muzzle.

Siamese have vivid blue, almond-shaped eyes that slant toward the nose—one of the breed's most distinguishing features. Orientals' eyes are typically blue, green, or one of each.

Siamese and Orientals are great breeds for people looking for an engaging, social, curious cat. They thrive on companionship and love being around their family—including other pets and kids. In fact, they can be rather demanding if they don't receive the attention they crave. Some pet parents get them in pairs so they'll entertain each other when the family is away.

Both Siamese and Orientals are extremely talkative and capable of producing a variety of sounds. If you think you hear a baby crying in the other room, it might just be your cat trying to get your attention with one of their legendary vocal tricks.

These playful breeds love toys and are always up for a game of fetch (especially since it gives them a chance to engage with their people). If left alone with an interactive toy, they'll entertain themselves for hours.

After a full day, these kitties are happy to snuggle in for a cozy nap. Preferred sleeping spots include a warm lap, under the covers with their favorite person, or in a heap with other feline friends.

Siamese and Orientals require a high-quality diet formulated for their life stage (e.g., kitten, adult, senior). Consider foods that account for breed-specific needs. For example, some diets have high protein and moderate fat to maintain your cat's lean, muscular body. And others use kibble designed to prevent cats from eating too quickly and experiencing stomach upset.

Obesity is a health concern for all cats. To keep calories in check and prevent weight gain, measure out your cat's meals and keep an eye on how many treats you're giving them. Just one small piece of cheese can account for half their recommended daily calories. As a guideline, treats should make up no more than 10% of their calories.

In addition to meals, make sure your cat has access to fresh, clean water at all times.

Siamese and Orientals are good self-groomers, and their short coats are relatively low-maintenance. Still, it's a good idea to brush them every week to remove loose hair. (Plus, they adore the attention that comes with a grooming session.)

You should also trim your cat's claws regularly to keep them from getting too long. Long nails are more likely to snag on something and become torn or damaged. Overgrown nails can also cause pain or infection in your cat's paw pads or lead to difficulty walking or using the litter box.

Finally, dental care is essential to every cat's lifelong health. When yours is young, start them on a dental health routine that includes at-home teeth brushing and professional exams and cleanings.

Some breeds are more susceptible to certain health conditions. Siamese and Oriental Shorthairs may be prone to Amyloidosis—a disease caused by a build-up of an abnormal protein in the heart, liver, kidney, or other organs. They can also be sensitive to anesthesia. Your veterinarian is your best resource for discussing these and other health concerns for your cat.