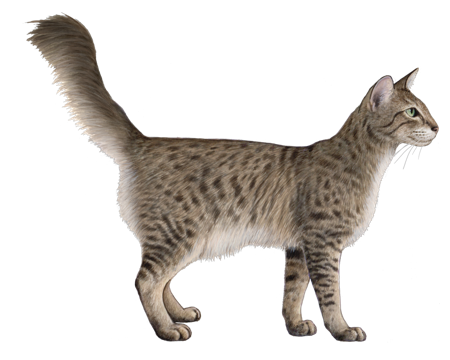 Oriental Longhairs are part of the Siamese breed group. They're social, intelligent, talkative cats that thrive in active households that provide them with plenty of attention.

Thanks to breeders' goal of developing every possible combination of coat colors and patterns within a single breed, Oriental Longhairs are among the world's most diverse cat breeds.

Cat breeding saw a dramatic decline during World War II. As breeders started up again after the war, they experimented with unique crosses that yielded many modern cat breeds—including the Oriental Longhair.

In the 1950s, breeders crossed Russian Blues, British Shorthairs, Abyssinians, and regular domestic cats with the Siamese. These litters were then bred with Siamese, which produced pointed and non-pointed kittens. In just a few generations, these cats were indistinguishable from the Siamese, except for their coloring. And the non-pointed cats from these breedings formed the foundation of the Oriental breed.

At first, different colored cats had unique breed names. But when the number of colors continued to grow, breeders decided to combine all non-pointed cats into one breed—the Oriental.

Orientals come in both a short and long coat length. The Longhair alone comes in hundreds of different color and pattern combinations. So, there's bound to be an Oriental Longhair that appeals to everyone.

Oriental Longhairs are medium-sized cats with a svelte but muscular build. They have long, tapering lines and graceful bodies that give the impression of strength without bulk.

The Oriental Longhair's coat is semi-long and lies close to the body. Below the fine, silky topcoat is a slight undercoat. All coat patterns and colors—including solid, shaded, smoke, parti-color, bi-color, pointed, or tabby patterned—are possible.

Oriental Longhairs have a long, tapering wedge-shaped head and flat skull. Their nose is a long, straight continuation of the forehead, with no break. Almond-shaped eyes slant toward the nose and come in blue, green, or one of each. These cats have large, pointed ears that are wide at the base.

The Oriental's slender neck, lithe body, slim legs, and thin, tapering tail are long and graceful, whereas their paws are small and dainty.

Oriental Longhairs are social—and sometimes demanding—cats that thrive on human companionship. They do well in homes where they can engage with plenty of other pets or people (including kids).

Orientals like to be where the action is, and they aren't shy about letting you know when they want more attention. Highly vocal, they're known to follow their humans around the house, carrying on a (sometimes one-sided) conversation. They don't like to be left alone—and can get into mischief when they are. So, many people get a pair of Orientals to keep each other entertained.

These cats keep their kitten-like attitude their entire lives. They love to play and often pick out a preferred toy. They can also learn to play fetch or participate in feline agility. Tall cat trees are essential for this intelligent, agile, and curious breed.

After an active day, Orientals love to curl up on a warm bed or on the lap of their favorite person.

Orientals need a high-quality diet formulated for their life stage (e.g., kitten, adult, senior). Because all cats are at risk of obesity, measure out meals and reduce portions if necessary. And don't forget to account for calories from treats in their daily totals. As a guideline, treats should make up no more than 10% of a cat's calories.

Despite its moderate length, the Oriental Longhair's coat sheds minimally and isn't prone to mats or tangles. Weekly brushing is typically sufficient to remove any loose hair and keep your cat looking their best.

No grooming routine is complete without a little dental hygiene. To support your Oriental's overall health, brush their teeth daily and schedule visits with your veterinarian for professional dental cleanings and exams.

Some breeds are more susceptible to certain health conditions. Oriental Longhairs may be prone to Amyloidosis—a disease caused by a build-up of an abnormal protein in the heart, liver, kidney, or other organs. They can also be sensitive to anesthesia. Your veterinarian is the best resource for questions about these and other health concerns for your cat.