A hound is a hound, right? Not so fast. Learn how the two families of this breed group vary in traits and personality. 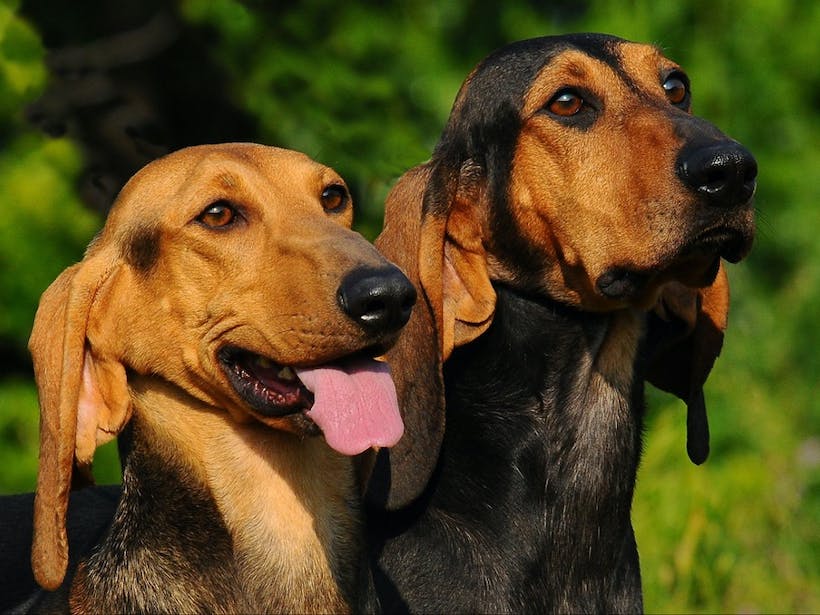 Scenthound versus sighthound—is there a difference? Yes! As you might guess, the former uses their powerful nose to track their quarry, whereas the latter relies on their superior sense of sight to hunt prey. But the differences go deeper than that.

Say “hello” to the scenthounds.

You’re probably more familiar with scenthounds than sighthounds. After all, many beloved characters from childhood stories—including the Redbone Coonhounds in Where the Red Fern Grows, the Beagle in Shiloh, and the Bloodhound in The Fox and the Hound—belong to this family of hounds.

Wherever the nose goes.

Bred to track down everything from raccoons to escaped convicts, scenthounds are talented smellers. But this means they tend to wander wherever their talented noses take them. In other words, keeping a scenthound on a leash or within a fenced area when outside is wise.

Scenthounds are happiest when they have opportunities to use their nose.

Organized nosework classes, long, nose-down walks with their humans, and games of finding hidden objects around the house are all great activities for these pups. And after being exercised both physically and mentally, they’re often more than happy to lazily lounge with the family.

Prey on the brain.

Though they aren’t particularly fast, these dogs were bred for stamina and endurance so they could stick with a scent trail over long distances. Once they finally sniff out their quarry, they instinctively pursue and corner it until their human hunting companions arrive.

This means scenthounds have a strong prey drive—which makes them prone to chasing after smaller animals when not fully trained or leashed.

Another hunting-influenced trait many scenthounds are known for? A deep, booming voice. These hounds were trained to vocalize while following a scent trail and bay once they trap their prey. Such vocalizations help the human hunters locate the dogs and quarry (since the hounds are typically far ahead of the humans during the hunt).

Often kept as pack animals for hunting, scenthounds tend to be quite sweet-tempered and tolerant, and they usually enjoy the company of other dogs. But don’t be surprised if they have a bit of an independent or stubborn streak when it comes to training.

This may stem from the fact that many hounds were bred to work at a distance from their human hunting companions. Thus, closely following commands was less important.

Note: Scenthounds tend to focus on the task at hand and aren’t easily distracted—a trait that may translate to ignoring their pet parents or not coming when called if they pick up an interesting scent.

The independent personality most scenthounds have can be a positive quality for households with working pet parents. Because it means these pups may not mind being left alone during the workday—whereas many other breeds might struggle with boredom or separation anxiety.

When imagining such a feat, you might think of a racing Whippet or Greyhound. But the Ibizan Hound, Pharaoh Hound, and Irish Wolfhound are other interesting examples of this family of hounds.

Sighthounds share the high prey drive of their scenthound cousins. And if not properly trained, they may find chasing small dogs, cats, and other petite furry friends irresistible.

But this trait also presents some fun bonding opportunities. Coursing, racing, and other dog sports allow your pup to show off their tremendous speed. And it’s great exercise for them. As with scenthounds, sighthounds crave the chance to use their natural instincts, chase, and sprint. (Always in a safe and secured area, of course.)

Also like their scenthound counterparts, sighthounds were bred to work independent of their human hunting companions, and they have a single-minded focus while on the job. So, they may be prone to ignoring their people if something intriguing catches their eye.

Oh, and obedience training? Not exactly one of their favorite activities.

Sighthounds are generally quite gentle, calm, and easy-going companions that get along well with other dogs. And they’re pretty good at entertaining themselves (in non-destructive ways) when alone.

Indoors, they’re perfectly happy to be a couch potato with their people. But outside, they’ll be sure to impress with their sudden bursts of speed.

One thing that certainly sets this family apart from the scenthounds is how quiet they generally are. No loud baying or booming voices from these pups! In fact, they’re often a bit shy or reserved (not the case with scenthounds) and more likely to show their affection in a calm or reserved fashion.

Learn more about hounds in our breed library.

How to Choose the Best Dog Breed for Your Lifestyle

Wondering what kind of dog you should get? Deciding the best dog breed for you is both fun and very important. Here are several scenarios to consider.

The best 5 summer activities for your dog (based on breed)

'Tis the season to enjoy the great outdoors with your pup. Browse this list of pet-friendly summer activities to find one that your pup will love.

As we all seek to foster a sense of inner peace, emotional support dogs (ESAs) are growing more and more popular. Find out which breeds are best suited for the job.