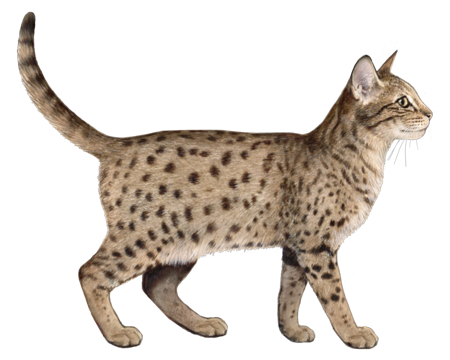 The Ocicat owes it beginning to a happy accident. In 1964, Breeder Virginia Daly began crossing Abyssinians with Siamese, hoping to create a Siamese with Aby color points. She didn't expect that the second litter would also include an ivory kitten with golden spots.

Daly's daughter thought this kitten, named Tonga, resembled an ocelot and suggested he be called an Ocicat. Though Tonga was beautiful, Daly's intent was not to breed spotted cats. So, she sold Tonga as a pet under the pretext that the new owner would have the cat neutered.

Shortly after, Daly connected with geneticist Dr. Clyde Keeler. He wanted to develop a breed similar to the extinct Egyptian Spotted Fishing Cat and thought Daly's spotted cat would be an excellent start. Daly repeated her previous steps and produced another spotted male. She then introduced the American Shorthair into the mix for body substance and to bring in the silver color.

Other breeders soon grew interested in Ocicats. But efforts to develop the breed slowed substantially when Daly had to step away from her work to care for a sick relative. After more than a decade, the program started back up. And in 1986, the Ocicat received its first championship status.

Ocicats are medium-sized cats with an athletic, muscular build. They have a wild but graceful appearance and spotted coat that comes in various colors.

Except for on the tip of the tail, every hair on an Ocicat has several bands of color. The way these bands combine is what creates the thumbprint-shaped spots on their coats.

Ocicats have wedge-shaped heads, broad muzzles, large, almond-shaped eyes, and alert, moderately large ears. Their legs are medium-length and strong, and their tails are relatively long—with a slight taper and dark tip.

Confident and people-oriented, Ocicats make devoted family pets. They're smart and can adapt to different environments, as well as learn to follow commands. But because of their social nature and love of attention, they don't like to be left alone. If your schedule requires you to be gone for long hours, consider getting other "sibling" pets to keep them company.

This athletic, active breed has a lot of energy. Ocicats love to play, chase, pounce, and show off their high-jumping abilities. Just be mindful when it comes to games of tug-of-war that some Ocicats can get possessive of their toys.

Many Ocicats have a dog-like disposition and, with training, can learn to fetch or do tricks. But when it's time to settle down, they're more than happy to curl up in the lap of their favorite person.

Ocicats don't have any particular dietary concerns, but they do require high-quality dry or wet food. Because nutritional needs vary for kittens, adults, and senior cats, opt for a formula that's age-appropriate for your pet. And remember to leave fresh, clean water out for your cat at all times.

The Ocicat's coat is very low maintenance and doesn't require regular brushing. Their nails, however, should be trimmed monthly. Nails that grow too long can injure your cat's paw pads—leading to pain, infection, or difficulty walking or using the litter box.

Dental care is also core to any grooming routine. Beginning in kittenhood, accustom your Ocicat to regular at-home teeth brushing, as well as periodic exams and professional cleanings.

Roughly one out of every three cats in the United States is overweight or obese. And those extra pounds can contribute to other health risks—such as arthritis, diabetes, and heart problems. Your veterinarian is the best resource for tips on managing your cat's weight.