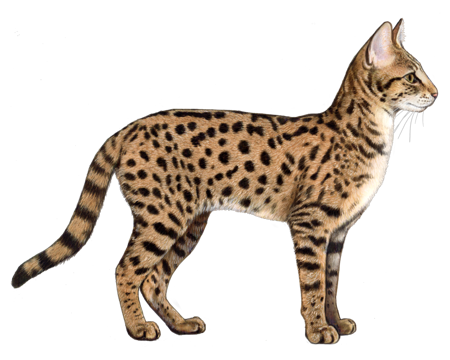 Savannahs are striking in both appearance and personality. Their relentless energy, curious nature, and "up for anything" attitude make these cats an excellent fit for active households looking to add an entertaining friend.

The Savannah is a cross between an African Serval and a Domestic cat. The first known hybrid of this type was born on April 7, 1986, and had the characteristics of both a domesticated cat and a wild Serval. Breeder Suzi Wood named the kitten—and this new breed—Savannah.

Wood didn't know if she could breed this first-generation hybrid cross (known as an F1) back to a Domestic cat. But her attempt was successful, and Savannah gave birth to a litter of second-generation hybrids (F2s).

Meanwhile, breeder Patrick Kelley had set his sights on creating a domestic cat with a spotted, wildcat appearance. After hearing about Wood's efforts, he contacted her and purchased the one female kitten Savannah had produced. He bred that kitten back to another Domestic, resulting in the first third-generation (F3) Savannah. Kelley convinced another breeder, Joyce Sroufe, to join his pursuit of this new breed. Together, they wrote the original breed standard for the Savannah.

The International Cat Association accepted the Savannah in 2001 and granted it Championship status in 2012. Though the breed is still in its infancy, it's gaining acceptance from breeders and attention from people drawn to these cats' exotic appearance and adventurous personalities.

Savannahs are tall cats with long bodies and slender necks. They can range in weight, but the older generations (F1s and F2s) are typically the largest.

Savannahs have triangular heads that are small in proportion to their bodies. Their massive, upright ears sit high on the head and have rounded tips. A unique trait of the breed is their flat, hooded eyes that contribute to an exotic appearance. The Savannah's body and legs are long and muscular, and the tail is short and thick.

Intelligent and high-energy, Savannahs require a lot of interaction and companionship. They do well in families with older children and get along with other cats and cat-friendly dogs. If their humans spend a lot of time away from home, they'll be happiest with a "sibling" pet to keep them company.

These curious kitties get bored quickly, and that can lead to mischief. But lots of exercise and entertainment can help keep them out of trouble. They love playing with interactive toys, learning tricks, walking on a leash, fetching, and even splashing around in the water.

The Savannah's signs of affection typically don't include curling up in a lap. But they often greet their favorite humans at the door, follow them from room to room, and headbutt them to display their love.

Savannahs are active cats that require a quality diet to meet their nutritional needs. Because those needs vary for kittens, adults, and senior cats, opt for a formula that's age-appropriate for your pet.

Even though Savannahs are very active cats, they are still at risk for obesity if they overeat. So, monitor your pet's food intake and reduce their portions if they start to gain too much weight. And remember, treats should make up no more than 10% of their daily calories.

In addition to daily meals, access to fresh, clean water is essential to every cat's health.

The Savannah's relatively short coat is easy to maintain. Occasional brushing with a steel comb is often all it takes to keep it looking its best. During seasonal shedding periods, your cat may need more frequent brushing.

Monthly nail trimming should be another component of their regular care. Nails that get too long are more likely to snag on something and become torn or damaged. And overgrown nails can even grow into your cat's paw pads, leading to pain or infection. In addition to clipping, providing a scratching post will help keep their nails in good shape and satisfy their instinct to scratch.

Finally, dental care is essential to a Savannah's lifelong health. From a young age, start yours on a dental routine that includes at-home teeth brushing and professional exams and cleanings.

Savannahs have some history of Hypertrophic Cardiomyopathy, which decreases the heart's efficiency and can lead to other issues. Your veterinarian is your best resource for discussing this condition and other health concerns for your cat.