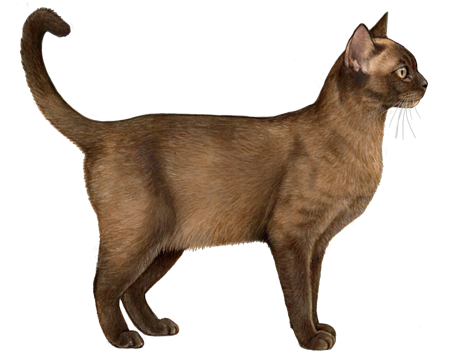 Burmese are confident, people-oriented cats that will happily take charge of the house if given a chance. They're also cuddlers by nature. If a Burmese sees an empty lap, they'll fill it.

The breed owes its start to a small brown cat named Wong Mau. In 1930, a sailor brought Wong Mau from Burma to San Francisco—where he gave her to Dr. Joseph G. Thompson. Though many thought this cat resembled a dark Siamese, Dr. Thompson saw in her something distinct. He started a breeding program to reproduce her medium-brown coat and darker brown points.

When two generations of breeding resulted in kittens with three different colorations (seal point Siamese, walnut-brown with dark brown points, and dark chocolate brown), Dr. Thompson and his fellow breeders had a choice to make. They decided that the dark brown coat was the most attractive and focused on consistently producing cats of that color. These sable-colored cats became the foundation of the Burmese breed.

As the popularity of the breed grew, breeders faced a new challenge. Lighter-colored kittens occasionally popped up in litters and, try as they might, breeders couldn't eliminate these color variations. They eventually discovered that Burmese carry genes for both dilution and chocolate. And these genes produced cats with medium-blue coats, beige coats, or pale silver coats.

Today, the Burmese breed standard includes all four coat colors. But in cat shows, the dilute Burmese compete in their own division.

The Burmese is a medium-sized cat with a strong, compact body. Their sturdy build, expressive eyes, and sweet expression give them a unique overall appearance.

Burmese have round heads and full faces that blend into their short muzzles. Their medium ears are broad at the base, rounded at the tips, and tilt forward, creating an alert look. Large, wide-set eyes come in colors ranging from yellow to gold.

These social cats make devoted family pets. They follow their humans from room to room and believe the best place to sleep is under the covers with their favorite person. Burmese have a particular fondness for children and make patient playmates for kids of all ages. When they can't be with their humans, they prefer to have another cat around—Burmese don't enjoy having the house to themselves.

Despite being soft-spoken, Burmese are good at letting people know their needs. They have minds of their own and can be very stubborn. Getting them to back down once they decide they want something can be a challenge. But most people find this confidence charming.

Burmese are intelligent and playful pets with kitten-like energy that lasts into adulthood. They can learn tricks, play with puzzle toys, and fetch objects as well as any hunting dog. Though they may be intrigued by the outdoors, these sweet-natured cats are best suited for indoor life. Their trusting personalities can make them oblivious to the dangers of the outside world.

Burmese require a high-quality diet. Because nutritional needs vary for kittens, adults, and senior cats, opt for a formula that's age-appropriate for your pet.

To keep your cat at a healthy weight, measure out meals and reduce portions if necessary. Also, keep an eye on how many treats you're giving them—especially if giving human food. Just one small piece of cheese can account for half their recommended daily calories. As a guideline, treats should make up no more than 10% of a cat's daily calories.

Finally, all cats need access to fresh, clean water at all times.

Burmese don't require a lot of grooming. An occasional once-over with a rubber brush is all it takes to keep their coats looking their best. But their nails require monthly trimming to prevent them from getting too long.

Long nails are more likely to snag on something and become torn or damaged. They can even grow into your cat's paw pads, leading to pain or infection. In addition to clipping, providing a scratching post will allow your cat to do some nail maintenance themselves (thanks to their instinct to scratch).

Good dental hygiene is essential to the overall health of every cat. So, be sure to start your Burmese on a dental routine early. It should include both at-home teeth brushing and professional exams and cleanings.

Some breeds are more susceptible to certain health conditions. Burmese may be more prone to developing Hypertrophic Cardiomyopathy—which decreases the heart's efficiency and can lead to other issues. Your veterinarian is your best resource for discussing this condition and other health concerns for your cat.