Decoding the bully breeds: How we now test for American Pit Bull Terrier

With 40x greater genetic resolution, our updated dog breed detection system can identify over 350 breeds, including American Pit Bull Terrier. Discover the history of this distinct breed and why we’re now able to detect it. 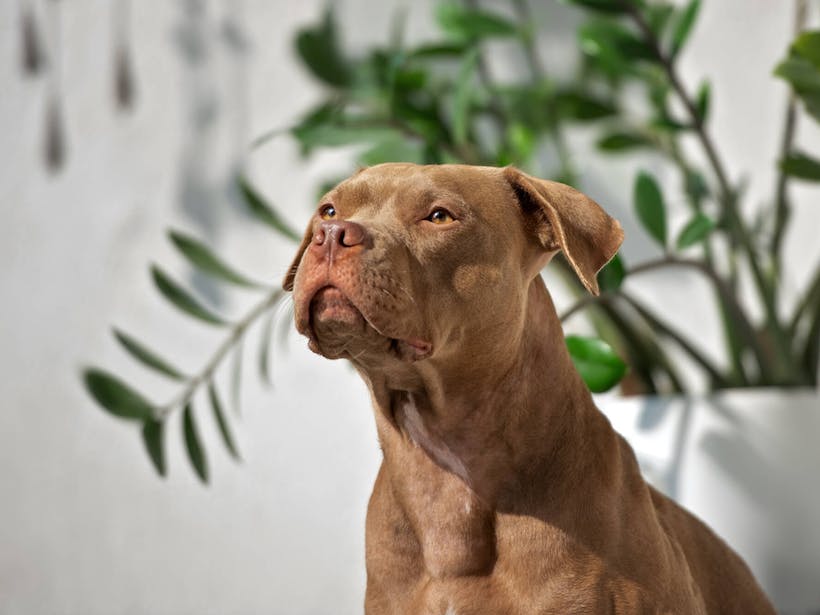 We’re pleased to share that—thanks to recent advancements in our breed detection system—Wisdom Panel™ dog DNA tests now screen for the American Pit Bull Terrier (APBT). To understand how this is possible and why it’s an exciting achievement, let’s first dig into the origin of the APBT.

Wait, the American Pit Bull Terrier is a real breed?

Absolutely. Several registries have recognized it as a distinct breed for over a century.

But keep in mind, there’s a difference between APBTs and the more generic “pit bull.” The latter doesn’t refer to a single recognized dog breed, but rather to a genetically diverse group of breeds associated with similar physical traits.

Pit bull-type dogs have historically been bred by combining guard dog breeds with terriers to strengthen tenacity, athleticism, and other desirable characteristics. As such, when people refer to “pit bulls,” they often mean any mix of breeds that produces a dog with a short coat, broad head, and muscular body.

Some of the most common breeds found in mixes with these characteristics include:

(Wisdom Panel™ tests detect all these breeds, by the way)

So, to reiterate, the American Pit Bull Terrier is a distinct breed, whereas a pit bull-type dog may include several different breeds, including APBT.

You’ll notice the APBT and the American Staffordshire Terrier (AST) are both on the list above. And that’s because they are, in fact, separate breeds. That said, their histories are certainly intertwined.

Keep reading to learn why.

Based on DNA data, this tree is a reconstruction of how bully dog populations differentiated from each other. Over time, they interbred less and became more distinctive (represented by colored circles). And today, most have only traces of the other ancestral populations (represented by colored bars). But American Pit Bull Terrier and American Staffordshire Terrier ancestries are still quite diverse and retain a considerable amount of DNA from each other’s primary population.

Where did the American Pit Bull Terrier come from?

Now that you know the American Pit Bull Terrier is definitely a breed, you might be wondering what these pups were bred for. Most experts think we can trace their roots to the early 1800s—when bull baiting was outlawed in England.

At that time, the people who had profited from the inhumane practice of bull baiting turned to an equally horrendous (and also illegal but easier to hide) crime: dog fighting, which often took place in pits. To make a breed suited for dog fighting, they likely crossed bully breeds (for their strength) with terriers (for their tenacity, intelligence, and agility).

Toward the end of the 1800s, these early pit dogs from the UK and Ireland arrived in the US—where they quickly gained popularity as herders, hunters, companions, and more. (Later, they even showed up in television, film, and advertising. The breed truly had a moment as America’s mascot.) Unfortunately, some APBTs were still used as fighting dogs, and this affiliation discouraged the AKC from recognizing the breed.

However, others realized the value of the breed despite this stigma. In 1898, the United Kennel Club recognized the American Pit Bull Terrier. (In fact, the club was seemingly created for the breed, as the founder’s own pup was the first APBT registered and the APBT was one of only 15 breeds recognized at the UKC’s founding.) Eleven years later, the American Dog Breeders Association—also formed specifically for the registration of the APBT—followed suit.

American Pit Bull Terrier vs. American Staffordshire Terrier: What are the differences?

Because the two breeds branched less than a century ago, they still share many similar characteristics, are frequently confused with one another, and are often mixed together. That’s where a dog breed identification test comes in handy.

To put it simply, no. The American Pit Bull Terrier is no more likely than any other breed to show aggression or animosity toward humans.

Some people assume otherwise based on the breed’s fighting background. But in reality, APBTs had to be gentle and friendly with humans because of their fighting background. They had human handlers, after all. So, it was paramount that these dogs didn’t harm people—not even when in the middle of a fight with another dog.

As such, APBTs arguably have more capacity to be affectionate, loving companions than other breeds. But keep in mind that every dog is unique, and many modern APBTs retain a strong prey drive. So, as with many guard dog breeds or terriers, they don’t always get along with other dogs or pets, such as cats. Early socialization and obedience training can help with social skills.

Fortunately, thanks to responsible pet parents and passionate advocates of the breed, negative myths about the APBT are finally getting debunked.

Because the American Pit Bull Terrier and American Staffordshire Terrier are so closely related, they can be difficult to differentiate genetically. But thanks to recent improvements to our breed detection system, we’re now able to accurately distinguish the DNA signal from each breed.

Here’s how we added APBT to the list of 350+ breeds that we test for.

Find out if your pup has American Pit Bull Terrier ancestry.

Wisdom Panel™ dog DNA tests screen for 350+ breeds—including APBT—with the world’s most accurate breed detection system. Decode your pup’s ancestry so you can tailor care to their unique needs and personality.

Genetic testing reveals more than your dog’s breed. From identifying exercise needs to uncovering gene mutations, a DNA test equips you with the information you need to provide the best possible care for your pup.