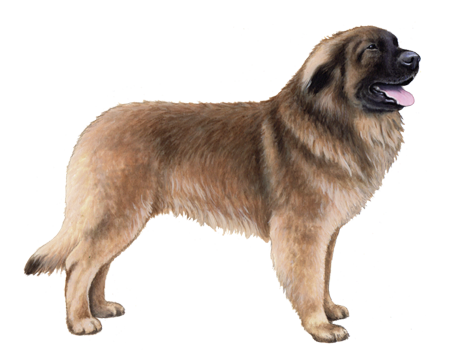 The Leonberger is a large-sized breed that’s loving and devoted to their family. They prefer spending time with their people, and when they’re left alone for too long, they may become destructive. This breed requires a lot of space to roam and exercise, both indoors and out. 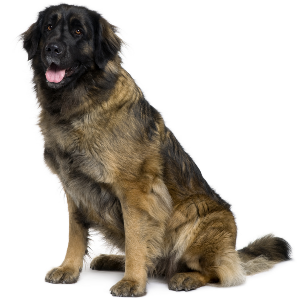 Unlike many other larger breed dogs you’ll find, the Leonberger was bred solely for its companionship qualities.

During the 19th century, German entrepreneur and politician Heinrich Essig of Leonberg used Newfoundlands, Saint Bernards, and other large breeds to create a dog that would be elegant and friendly enough for European royalty. As it turns out, his work paid off, because everyone from the Prince of Wales, Tsar Alexander II, and Napoleon III ended up having a Leonberger for a companion.

Though originally developed as companion pets, the Leonberger has performed its fair share of work on farms, in the water, and on the pastures. The first Leonberger clubs formed in 1891, and these days, the Leonberger is popular throughout much of Europe.

The breed came to the United States from Germany between 1975 and 1985 with five separate families. They helped establish the Leonberger Club of America, and in 2003 the breed began participating in the American Kennel Club’s Foundation Stock Services Program.

The large, muscular Leonberger has been compared to a lion thanks to their powerful appearance. Male Leonbergers even have a lion-like mane. They have a characteristic black mask, dark brown, almond-shaped eyes, medium-sized, triangular ears, and a medium to long double coat that is water-resistant.

The Leonberger has a medium to long double coat that is resistant to water. Their outer coat is medium-soft to coarse, while the undercoat is soft and dense.

Males tend to have longer coats than females, and adult males also have a mane. They come in lion-yellow, sand-colored, golden to red and red-brown, and any combination of those. They always have a black mask.

Besides the Leonberger’s overall massive size, their black mask and the fact that adult males have a lion-like mane are unique characteristics to this breed, as well. 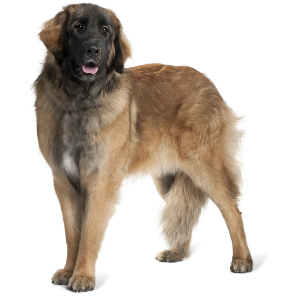 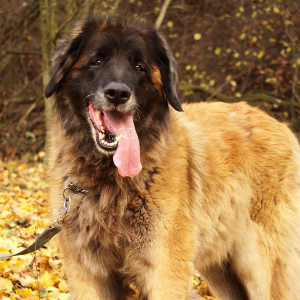 These large and loveable dogs make great family pets, and they are loyal and gentle companions with their people. Because of their large size, they do require some additional considerations, and they don’t do well when left alone.

Despite their overpowering appearance, the Leonberger is a gentle and loving giant, and they take their role as a family member very seriously. They are loyal and playful, and while they can be great with kids, because of their large size, they should always have supervision around small children. Eager to please, Leonbergers take well to training.

Your Leonberger is a large breed that will do well with any age-appropriate, high-quality dog food that’s suited to their particular weight and any additional health concerns. A large breed dog food may be a great fit for your Leonberger.

As with any dog, it’s important to monitor the amount of food and treats that you give your Leonberger, especially since some dogs are prone to gaining weight as they age. Your veterinarian is always a good source to help provide you with appropriate nutrition and feeding guidelines.

Leonbergers have a thick double coat that frequently sheds, and even more so during shedding season twice a year. Brush your Leonberger every day to keep their coat healthy and to remove loose hair, paying close attention to the back of the legs and behind the ears, where the fur is more likely to mat. You should also plan to do more thorough grooming once a week, carefully using a metal comb and undercoat rake for the undercoat, as well as a slicker brush and pin brush for the outer coat.

All dogs require regular dental care, including at-home teeth brushing and professional dental cleanings, and Leonberger is no exception. Maintaining good dental hygiene is important for their overall long-term health.

The Leonberger is a larger breed that requires plenty of space to roam and play. They are usually calm, but they do require moderate exercise every day to remain happy and healthy.

As puppies, Leonbergers have even more energy to expend. This breed loves to jog, hike, or even bike with their people; they are also great swimmers, and they do well at dog sports like draft and agility training.

When it comes to training, teaching your Leonberger is likely to be a cinch. This breed is eager-to-please and intelligent, so they catch on quickly.

Proper training and socialization is important, since they are a strong and active breed, and are especially enthusiastic when young.

Although they take to training easily, they are a social breed that prefers to spend time with their people. No matter how much training a Leonberger has, they may become destructive if left alone for too long. 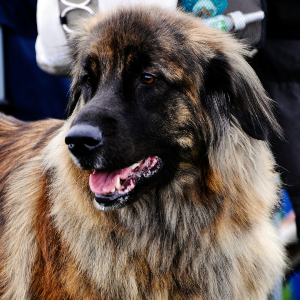