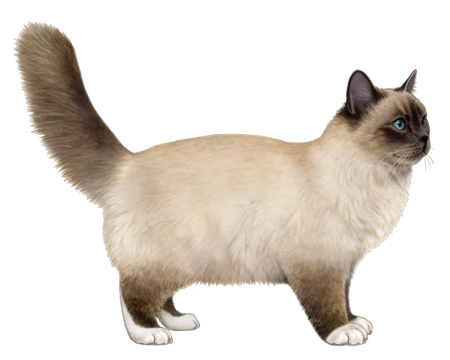 Birmans are an ancient breed, but their beauty never gets old. These easy-going cats make loyal friends and affectionate family pets.

No one knows the true origin of the Birman, but many legends exist.

According to one folk tale, Kittah priests raised 100 pure white cats in their temple in Burma before the birth of Buddha. Inside the temple stood a statue of a golden goddess with sapphire eyes. When raiders attacked the temple, mortally wounding a priest, one of the cats came to his master and stood on his chest as he died.

As the story goes, the priest's soul entered the cat's body and transformed its appearance into what we now know as a seal point Birman—with pure white paws and sapphire eyes like the goddess. The day after the cat's passing, the other 99 cats also transformed, leading to the belief that when a Birman cat dies, a priest's soul escorts it to heaven.

Legends aside, the Birman breed—or "the Sacred cat of Burma"—first gained recognition in France in the 1920s. England then acknowledged the breed in 1966, and the United States followed suit in 1967.

The Birman has since earned a place on the list of most popular cat breeds in the world—which isn't surprising, given their mystique, charming personalities, and striking looks.

Birmans are medium-sized, color-pointed cats. Their bodies are elongated, stocky, and strong.

The Birman's legendary coat is medium-length with a silky texture and no undercoat. As pointed cats, Birmans have darker colors on their face, legs, tail, and ears. They're known for their "gloves" and "laces"—pure white paws with white fur that extends up the back of their hocks.

All Birman kittens are born white, and color comes in as they mature. With 20 different colors possible, they can range from shades of light ivory to warm gold. And all pointed colors are allowed under the breed standard.

One notable trait of Birmans is their Roman nose, which has a prominent bridge that appears curved when viewed from the side. They also have strong chins and somewhat rounded muzzles. Their medium-length ears are almost as wide as they are tall. And their round, vivid, blue eyes give them a sweet expression. Medium-length legs, round, large paws, and a medium-length tail round out their appearance.

Birmans are an excellent cat breed for families. They are laid back, adapt well to various home environments, and tend to get along with other cats, cat-friendly dogs, and kids.

Known for having affectionate, loyal personalities, Birmans love to follow their humans around (or meet new ones) and enjoy relaxing on a warm lap. Their gentle, quiet, social nature makes them a great pet for seniors.

Birmans also have a playful streak and enjoy chasing balls or playing with interactive toys. However, they never get too hyper or demanding. They're a low-maintenance cat that rarely causes trouble and fits into just about any family dynamic.

To help keep their weight in a healthy range, measure out meals and reduce portions if your cat gains weight. Also, keep an eye on how many treats you give them. Just one ounce of cheese can account for half their recommended daily calories. As a guideline, treats should make up no more than 10% of a cat's calories.

In addition to daily meals, be sure to provide plenty of fresh, clean water.

Despite their longish hair, Birmans' coats are relatively easy to maintain. Because they have a single coat, they shed minimally throughout most of the year. Brushing once a week with a comb is typically sufficient to keep their coats looking their best. That said, you may need to brush more frequently in the spring—when they shed their winter coats.

Birmans also need their claws trimmed regularly. If left too long, claws may dig into your cat's paws and cause pain or infection. Nails that get too long are more likely to snag on something and become torn or damaged, as well. In addition to clipping, providing a scratching post will help keep their nails in good shape and satisfy their instinct to scratch.

Finally, dental care is essential to any cat's lifelong health. So from a young age, start your cat on a dental routine that includes at-home teeth brushing and professional exams and cleanings.

Roughly one of every three cats in the United States is overweight or obese. And that extra weight can contribute to other health risks—such as arthritis, diabetes, and heart problems. Your veterinarian is the best resource for tips on keeping your cat at a healthy weight.