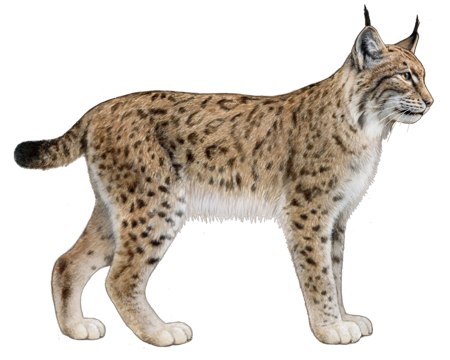 Mountain Cats come in all shapes and sizes, and they inhabit regions in five out of the world's seven continents.

Mountain Cats include several wild cat species—including the Bobcat, Eurasian Lynx, Iberian Lynx, Jaguarundi, Margay, Puma, Sand Cat, and Cheetah. Though they don't all share the same genus, they all belong to the Felinae subfamily.

The Felinae subfamily originated in Eurasia about 10 million years ago. Today, the Mountain Cat group inhabits regions in North, Central, and South America, as well as Europe, Africa, and Asia. Though many of these cats reside in mountainous areas, some—like the Cheetah—can thrive at all elevations.

Iberian Lynx are the world's most endangered feline species, with a population of just over 400. Other Mountain Cats, such as the Bobcat, have stable populations. But habitat loss, hunters, poachers, and other factors now threaten all wild cats in this group.

Mountain Cats vary in size and appearance. On the large end of the spectrum, Pumas can weigh up to 220 pounds. By contrast, Sand Cats can weigh as little as four pounds.

Each species of Mountain Cat has its own unique set of characteristics. The Jaguarundi, for instance, more closely resembles a weasel than a wild cat. And Margays have broad feet with flexible toes that allow them to hang from trees by one hindfoot.

That said, Mountain Cats that share the same genus often have common traits. For instance, Bobcats, Iberian Lynx, and Eurasian Lynx all have short, stubby tails and tufts of black fur on their ears.

Mountain Cats are primarily solitary animals that live and hunt on their own. They typically come together only to mate, resolve conflicts, or (sometimes) raise kittens.

Like all felines, Mountain Cats are carnivores, and their diets consist mainly of meat. Depending on their size and location, they eat everything from gazelles and rabbits to birds and insects.

Mountain Cats groom themselves to keep clean and remove their scent—which helps keep potential prey from detecting them.

Mountain Cats are at risk for many of the same diseases as domestic cats, including rabies, distemper, and feline immunodeficiency virus.