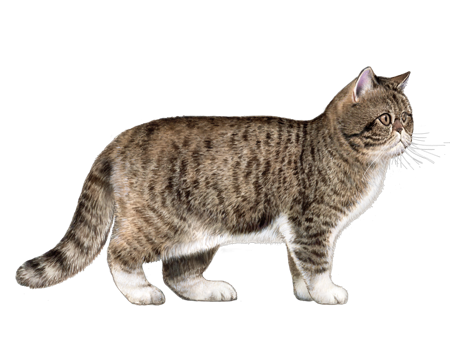 If you love Persians' distinctive look but could do without their high-maintenance coats, the Exotic Shorthair is the breed for you. These sweet cats make calm, affectionate, undemanding family pets.

In the 1960s, cat breeders in the United States attempted to introduce the Silver Persian's coat and eye color into the American Shorthair line. Though this effort produced beautiful cats, they didn't necessarily look like true American Shorthairs. Rather than muddy the existing breed standard, Jane Martinke decided to develop a new breed entirely.

The name proposed for this new breed—a silver, short-coated cat that resembled a Persian—was "Sterling." But the one that ultimately stuck was "Exotic Shorthair," and the breed standard included all Persian colors.

Around the same time, another cat breeder named Carolyn Bussey set out to develop a brown Persian. She bred a red tabby Persian and a Burmese and—because brown is a recessive gene—ended up with a litter of black kittens. But those kittens inspired her to create a shorthaired Persian.

So, when the Cat Fanciers Association accepted the Exotic Shorthair breed, Bussey had a headstart breeding these adorable new cats. Still, Exotics developed slowly at first because Persian breeders were hesitant to have their cats contribute to the new breed line.

Fortunately, the appeal of the Exotic became impossible to resist. And the Exotic Shorthair is now one of the most popular cat breeds in the world.

Exotic Shorthairs are medium-to-large, heavily-boned cats. They are well-balanced with round lines and sweet expressions.

Move over, teddy bears. Exotics may just have the cuddliest plush coats around. Their dense, soft hair is medium in length with a thick undercoat. They come in an assortment of coat colors and patterns—including solid, bicolor, calico, tortoiseshell, tabby, shaded, smoke, and pointed.

If there's a theme to the Exotic's overall appearance, it's "round." These cats have massive, round heads, round faces, round, full eyes, rounded tips on their small ears, and large, round paws.

Like Persians, they also have short, snub noses with a break between the eyes. Exotics have short and thick legs, and they carry their tails at an angle lower than their backs.

Exotics are calm, affectionate cats that usually get along with everyone in the home, including other pets and kids. This quiet breed is likely to get your attention by gazing at you with their sweet expressions. But when they decide to be vocal, they use a soft, musical chirp.

Despite their low-key energy, Exotics have a curious, playful nature. They love to chase balls and pounce on toys. But when it's time to relax, they will happily crawl into your lap. Some Exotics even sit on their human's shoulder. Though they love attention, they aren't overly demanding when you need your own space.

Exotics benefit from a high-quality diet appropriate for their life stage (e.g., kitten, adult, senior). Obesity is a growing health concern for cats, so it's important to carefully monitor their food intake. To avoid overfeeding, use a standard measuring cup to portion out their meals and reduce amounts if your cat gains weight. And as a guideline, treats should make up no more than 10% of their daily calories.

In addition to meals, make sure to provide your cat with plenty of fresh, clean water.

An Exotic's grooming needs are minimal compared to those of a Persian. Just comb your cat weekly and wipe their eyes to remove any dust or debris.

Their nails also require monthly trimming. Nails that get too long can snag on something and become torn or damaged. Long nails can also grow into your cat's paw pads, leading to pain or infection.

Exotics are a brachycephalic breed. That means they have physical features—such as a flat face, short nose, and wide skull—that may cause health issues. Potential challenges include breathing difficulties, heat sensitivity, jaw deformities that lead to dental disease, trouble eating or drinking, and skin or eye issues.

Exotics may also be more prone to developing Hypertrophic Cardiomyopathy. This condition decreases the heart's efficiency and can lead to other issues. Talk with your veterinarian about ways you can manage or minimize the health risks of your Persian cat.