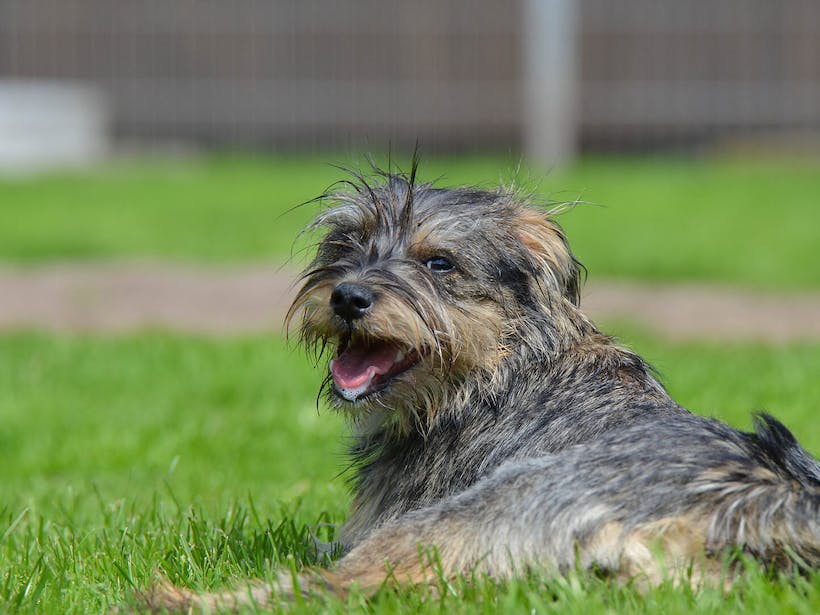 Dogs are nothing if not entertaining. Their goofy personalities and silly antics undoubtedly make you smile. But sometimes you may watch your pup and wonder: “why does my dog do that?”

Let’s take some of the mystery out of your furry friend. Here are the most likely reasons behind seven common dog behaviors.

Why do dogs eat grass?

It’s not entirely clear why dogs eat grass, though there have been several theories over the years.

One explanation is that dogs eat grass to make themselves throw up when their stomachs are upset. The assumption is that the blades of grass tickle the dog’s throat and stomach lining, which causes the dog to vomit. While this is physiologically plausible, experts are unsure if dogs are smart enough to self-identify the problem (an upset tummy) and determine the appropriate cure (a dose of grass). And the majority of dogs that eat grass don’t vomit afterward.

Another theory is that dogs eat grass because they’re not getting certain nutrients in their food. While it’s true that grass has some nutritional value, there’s not much evidence to back this theory up. Still, if you suspect there’s an issue with your dog’s diet, the best first step is a conversation with your veterinarian.

The most likely reason dogs eat grass may also be the simplest: they like the taste! And, considering some of the unsavory things dogs enjoy eating (e.g., poop, garbage, the glob of who-knows-what they found under the stove), the occasional serving of greens doesn’t seem so bad.

Regardless of why they do it, most veterinarians believe eating grass is a relatively normal and harmless behavior. However, lawns sprayed with pesticides can be dangerous to dogs. So it’s best to keep your pup from munching on grass treated with fertilizers or chemicals of any kind.

Why do dogs hump?

Humping in dogs is commonly associated with sexual behavior. And, yes, male dogs do hump or mount when they mate. But, female dogs and neutered male dogs also hump each other, and there’s nothing sexual about it.

Humping is typically a sign of energy arousal. Dogs may do it when they’re playing, fighting, frustrated, or bored. They also don’t limit this activity to their fellow canines. They may hump an inanimate object, such as a pillow, to release pent-up energy. Or they may hump your leg if they feel they’re being ignored and want you to notice them. (And you have to admit, when a dog humps your leg, it does get your attention).

For some dogs, humping is a way to show dominance—or at least try to. A dog that wants to test out their place in the pack may try this maneuver to see if other dogs (or humans) tolerate it.

Though humping is a natural behavior in dogs, it can be an annoying habit. To prevent the action, redirect your dog’s energy to another activity, or remove your dog from the stimulating situation. And as always, make sure your dog gets plenty of exercise and enrichment.

Why do dogs do zoomies?

We’ve all seen it—that sudden burst of energy where a dog runs in high-speed circles around a room or yard. These moments are officially called FRAP—frenetic random activity periods—but are more commonly known to pet parents as “zoomies.” They occur when a dog has too much energy stored up and needs a quick release.

Zoomies often happen after a dog wakes up from a night of sleep or after a day spent in the crate—times when they are well-rested and need to let loose. But dogs can go on these tears for other reasons, too.

One classic trigger for zoomies is a bath. Bathing can be stressful for pups, so they may do zoomies after to get rid of that nervous energy (or celebrate the conclusion of an unwanted grooming session). They may also run around rubbing themselves on furniture or rolling in grass to get the water off their fur.

Zoomies are normal behavior, especially for young dogs. As your pup gets older and their energy level decreases, these sudden bursts will typically happen less often. But as long as your dog has a safe place to run, you can enjoy this happy activity while it lasts!

Why do dogs stare?

First, the good news: it’s not because they’re trying to hypnotize you with their eyes (though it can sometimes feel that way). For dogs, staring is a way to communicate. At the most basic level, they do it to give or receive information.

When a dog stares at you, they may be trying to tell you something. Examples include letting you know that they need to go outside for a potty break, or that they’d like to go for a walk, or that the sandwich you’re eating looks tasty (and maybe you’d like to share?). These types of stares are usually friendly and hopeful. But dogs can also give a hard, unblinking stare that may precede aggressive behavior. If you see signs of this hard stare in your dog, talk to a trainer or animal behaviorist.

Dogs also stare when they are waiting to receive information from you. They may be looking for cues about what you want them to do—especially if they think performing the desired command will earn them a reward. This dynamic is the basis of positive reinforcement training.

Best of all, dogs stare as an expression of affection. In fact, when dogs and people look into each other’s eyes, oxytocin—also known as the love hormone—is released in their brains. This hormone plays a role in bonding and triggers feelings of love.

Why do dogs howl at sirens?

Howling is a behavior dogs inherited from their wolf ancestors. Just like barking and baying, howling is a form of communication. In the wild, wolves and coyotes would howl to alert the pack to their location, announce their arrival, or warn other animals to stay away. Those instincts remain in modern dogs.

But why do some dogs howl specifically at sirens? The most probable explanation is that the siren sound is similar to the high-pitched vocalizations of their fellow dogs. It’s their way of acknowledging that they heard the noise and letting the other dog (or the fire truck) know they are ready to join in the excitement.

Howling at sirens is a triggered behavior. Meaning, when the sound disappears, the howling usually stops. It can be amusing to hear a dog howl at a siren—unless you’re on a conference call or have a noise-sensitive neighbor. If the howling becomes a nuisance, a behavior modification plan may help.

Why do dogs scoot on their butts?

Ah, the “boot scoot”—that familiar scene when a dog drags their hindquarters across the floor. Though the action itself can look a little funny, the reason for it is typically no laughing matter. Dragging their bottoms is usually a sign of discomfort and can be caused by:

An occasional scoot is typically not a reason for concern. But if your pup is frequently dragging their backside across the ground, talk to your veterinarian so you can get to the bottom (no pun intended) of the issue.

Why do dogs roll around on the ground?

There are a couple of reasons that dogs might roll around in the grass or dirt. The first is one that humans can relate to: it feels good! If a dog is a little itchy, grass can help give a much-needed scratch. Rolling on the ground can also serve as a self-grooming session, removing any dirt or loose fur trapped in their coats. (But don’t assume this can take the place of regular brushing and bathing).

The other common reason dogs roll on the ground is a little harder for us humans to appreciate. They do it to transfer a scent onto their bodies—and the stinkier that smell, the better. By disguising their own scent with something else (bird poop, for example), they can more easily protect themselves from predators or sneak up on prey.

Unsure if your dog’s behavior is normal? Ask a vet.

Dogs exhibit a lot of quirky behaviors, many of which are harmless and entertaining. But if your dog is acting strange or doing something that gives you concern, the best thing you can do is have a conversation with your veterinarian.

All dogs feel love. But breed and genetics influence how they prefer to show and receive it. Learn how to spot the signs your dog loves you.

How to Tell If Your Dog Has Environmental Allergies

Got an itchy pup? Cases of environmental allergies in dogs have increased more than 30% just in the last 10 years. Learn about common causes and solutions.