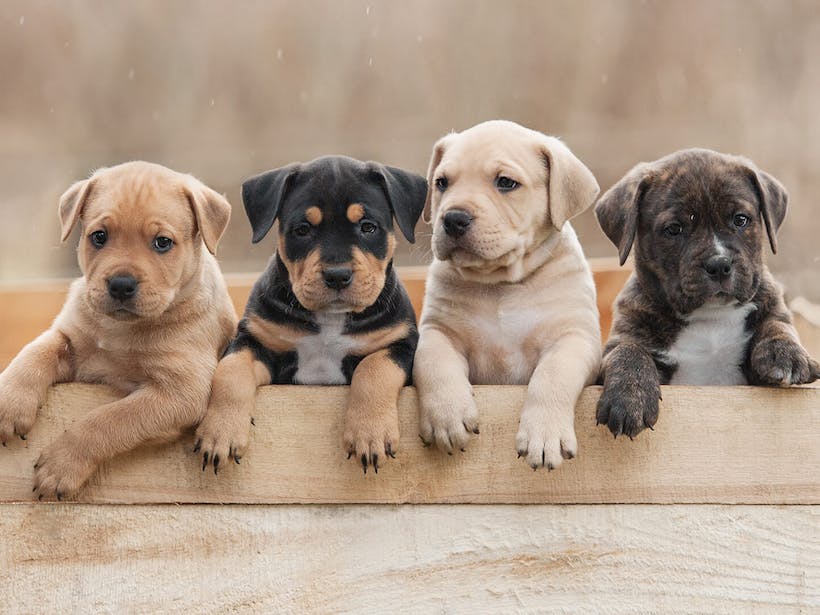 Have you ever noticed that puppies from the same litter often look very different? If you take a peek at the DNA of such puppies, you’d likely also find that they have different ancestry trees.

How is this possible?

There are a couple of reasons litter mates may look different. One relates to how dogs inherit genes. The other has to do with the reproductive systems and mating habits of dogs.

Let’s look at both.

In dogs (and other animals), parents pass down 50% of their genetic makeup to their offspring. The puppies, however, inherit segments of the available DNA at random.

The result of this process, known as genetic recombination or genetic reshuffling, is that the actual genetic composition of puppies in the litter varies.

Can dogs have identical twins?

Just as human siblings have different physical characteristics, puppies from the same litter often have variation in their coat color, coat length, head size, ear shape and other physical features.

The exception to this phenomenon is identical twins, as they share the same genetic makeup. But twins are extremely rare in dogs. In fact, there has been only one scientifically confirmed case.

Reason 2: A litter of puppies can have different fathers.

Female dogs produce multiple eggs at one time—that’s why they typically give birth to litters rather than single puppies. And they remain in heat (i.e., eggs are available for fertilization in the uterus) for around 10 days.

Since dogs are polygamous, females will mate with any available male dog while in heat. As a result, puppies from the same litter may actually have different fathers.

As you might expect, the genetic variation among puppies with different fathers is greater than that of those who share the same father. On average, siblings who share the same parents are approximately 50% genetically related. But if more than one male fathers a litter, the half-siblings puppies are only ~25% genetically similar.

Want to learn more about how ancestry affects your pup’s appearance?

It’s so hard to resist the appeal of puppy dog eyes. And that’s by design. Learn the story behind how dogs developed the ability to make facial expressions.