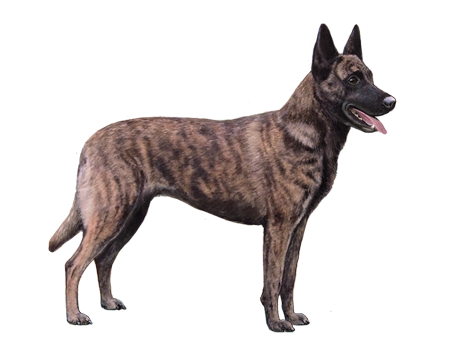 Dutch Shepherds are athletic, intelligent, and independent dogs. Innate herding instincts have helped the breed earn a reputation as a world-class working dog that retains its wild ancestors' characteristics. 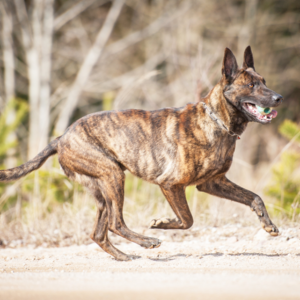 Dutch Shepherds—also known as the Dutchie or Hollandse Herdershond—originated from rural areas in what is now part of the Netherlands. Farmers needed a well-rounded breed that could herd cows, pull carts to market, guard the farm, and watch the children. The Dutch Shepherd fit the bill.

The Nederlandse Herdershonden Club developed the first breed standard in 1898. The original standard allowed all coat colors, but the standard was edited in 1914 to limit the Dutch Shepherd's coloring to brindle. This change was to distinguish it from other shepherd breeds, such as the German Shepherd and Belgian Shepherd.

The Dutch Shepherd's versatile nature and strong work ethic have made this lesser-known breed popular for many jobs. Today they work as farm dogs, police dogs, search and rescue dogs, and guide dogs for owners with disabilities.

Dutch Shepherds can have three different kinds of coats: short-hair, long-hair, and rough-hair. The short-hair coat is hard, close-fitting, and not too short, with the ruff, breaches, and tail plume visible.

The long-hair coat is long and straight (without curls or waves), and harsh to the touch. The ruff, breeches, and tail are distinct and abundantly coated while the hair on their heads, ears, feet, and hind legs below the hocks is short and densely coated.

The rough-hair coat is dense, harsh, and tousled. The hair on the upper and lower lips forms a mustache and beard. The hair over the eyes forms well defined, coarse eyebrows that are distinct but not exaggerated.

In all three coat types, the Dutch Shepherd has a woolly undercoat.

Dutch Shepherds are brindle in color. Their base color is silver or golden. In golden dogs, the base color can range from light sand to chestnut red with black or dark brown brindle. They may have a small amount of white on their chest or toes.

The brindle color may be less pronounced in Dutch Shepherds with rough coats because the tousled coat obscures the coloring. 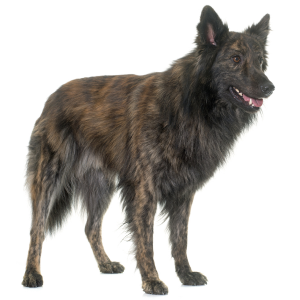 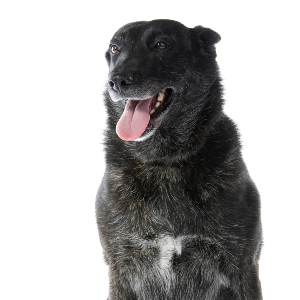 Dutch Shepherds are alert, watchful, reliable dogs that delight in completing a task. The breed is confident enough to work solo but also cooperative and willing to work alongside its owner or other dogs to get the job done. Their demeanors as active, independent, and persistent.

Despite being bred for work, Dutch Shepherds know how to relax and will adjust their energy levels to the situation. As pets, Dutch Shepherds love spending time with their people and fit in well with active families. This is not a breed that wants to be left alone for long periods with nothing to do.

Feed Dutch Shepherds a high-quality dog food that is appropriate for their life stage (e.g., puppy, adult, senior) and consider a diet formulated for active breeds. Although these high-energy dogs are not known for becoming overweight, portioning out their food with a measuring cup and limiting treats to no more than 10% of their daily calories can help prevent overfeeding.

A Dutch Shepherd's grooming needs depend on its coat type. The short-coated dogs require only occasional brushing, while long-haired Dutch Shepherds must be brushed once per week. Both short-and long-haired dogs will need extra brushing during spring and fall shedding seasons to remove cast-off hair and reduce shedding. In addition to brushing rough-coated Dutch Shepherds once per month, their coats need to be hand-stripped twice per year. A professional groomer can help.

Dutch Shepherds also require regular ear cleanings, nail trims, and a dental care routine that includes at-home teeth-brushing and professional cleanings. Start these grooming essentials when Dutch Shepherds are puppies to ensure they are part of a lifelong habit.

These all-purpose working dogs love to be on the move. Dutch Shepherds make great running companions and enjoy brisk walks, hiking, swimming, and trips to the dog park. These highly intelligent dogs also excel in agility, obedience, rally, dock diving, and—of course—herding. Mental stimulation is important, too. Puzzle toys and other games are helpful ways to keep their minds engaged.

With proper obedience training, Dutch Shepherds listen to their owners and follow instructions. However, without this training, they tend to be independent and make their own decisions. Avoid repetitive activities—these will cause Dutch Shepherds to lose interest. Fast-paced games and activities that combine mental and physical stimulation are best to keep them engaged (and help burn off energy). Focus on positive reinforcement and reward-based training. 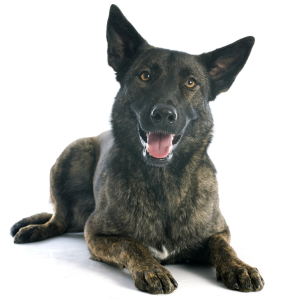 Knowing if your Dutch Shepherd Dog is a carrier or at-risk for these conditions can help you and your veterinarian plan for your pup's lifelong care. With Wisdom Panel™ Premium, you can get results for over 200 genetic health tests.