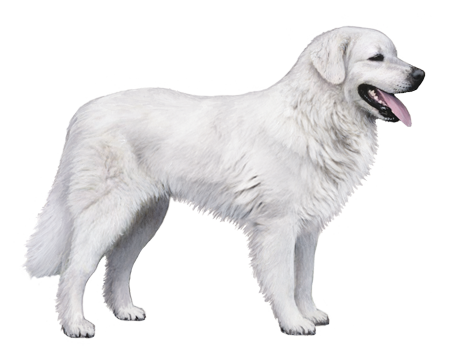 Bred in harsh mountainsides, the Slovakian Chuvach is ready for anything. This breed is alert and fearless, courageous, and ready to fight off anyone (or any animal) that comes into their territory. They are fiercely loyal and protective of their people, and can be wary of strangers, but when they are with people they know, Slovakian Chuvachs are faithful and lively.

The Slovakian Chuvach (or Tatra Chuvach, as they were called back in the day), protected sheep and other animals for Slovak alpine farmers. They acted as watch and guard dogs for their mountain-dwelling people, in both herding and military capacities. Besides their ability to keep a watchful eye, the Slovakian Chuvach proved to be excellent companions, and they were able to work the cattle and drive poultry, as well.

Eventually the breed started to gain popularity, as visitors took notice of thsee beautiful and useful dogs. This is how the Slovakian Chuvach was introduced from the mountains to the lowlands. In the early 1900s, the Stud Book for the Tatra Chuvach in Czechoslovakia was founded, and the club for Tatra Chuvach breeders continues to keep records and show the dogs all throughout the region.

The Slovakian Chuvach appears similar to a mountain dog, with a large, muscular body and thick coat. It is strong-boned and lively, with a broad forehead and low-set tail.

This breed has a thick and dense coat with short, close hair on the head and legs, and slightly longer hair on the rear side of the legs. The hair is wavy mostly on the mane. Its undercoat is made of dense, fine hair. This breed is solid white in color.

The Slovakian Chuvach has traits that are similar to a typical mountain dog, with its big-boned, muscular structure, but its striking white coat sets it apart. 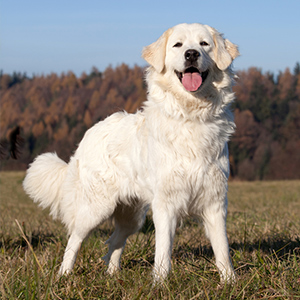 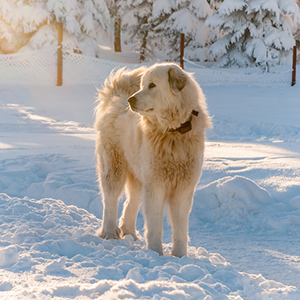 If you’re looking for an excellent guard dog, the Slovakian Chuvach has its roots in watchmanship. They are suspicious of strangers, and aggressive when they feel like they need to be, although with their own family they are loyal and loving. When given the proper amount of room to roam and explore, and the right amount of exercise, they make excellent family pets. They continue to excel as livestock guardians.

Slovakian Chuvachs require a high-quality dog food that is age-appropriate—whether it’s commercially manufactured or homemade (with a veterinarian’s supervision and approval). It’s important to monitor the amount of food you give your Slovakian Chuvach. Reduce the portions or restrict calories if your pup gains weight. Your veterinarian is always a good source to provide you with appropriate nutrition and feeding guidelines.

The Slovakian Chuvach has a glorious white coat that is dense and wavy, and requires a little bit of extra care. Weekly grooming can help keep stray hairs at bay, but the breed also should get regular baths to help its coat remain in top shape.

All dogs require regular dental care, including at-home teeth brushing and professional dental cleanings, and the Slovakian Chuvach is no exception. Maintaining good dental hygiene is important for its overall long-term health.

Although the Slovakian Chuvach was bred as a working dog, and they are apt at chasing and wrangling livestock, they are less energetic than many similar breeds. Daily exercise that they might enjoy could include time with their pet parents in the yard, chasing balls or Frisbees, swimming, or taking walks. This is an intelligent breed that would also do well with dog sports like agility and rally.

Slovakian Chuvachs are smart, but they can be independent. They tend to bark, and they are highly suspicious of strangers; they may even become aggressive as they feel uncertain or uncomfortable. Early and proper training and socialization is very important with this breed. Unfortunately, training may be difficult with this dog, so working with a professional is often necessary. They tend to learn best with positive reinforcement training methods. 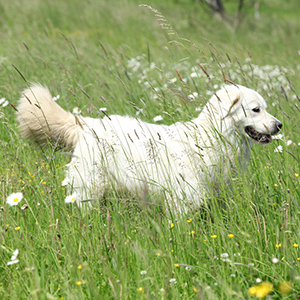