Can your dog see color? (Yes, and here’s what it looks like.)

You and your pup share a world together. But due to color blindness and other differences in vision, you don’t see it the same way. Find out what that means for their care. 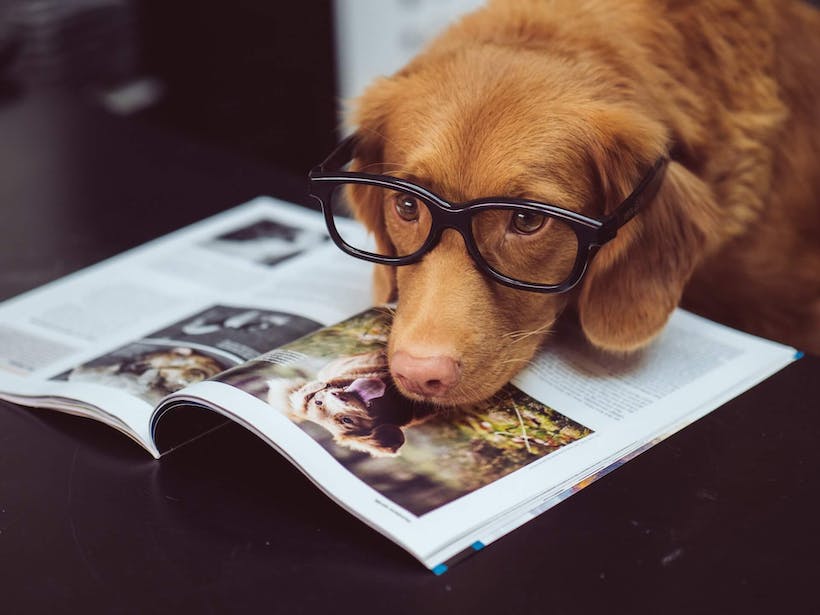 You might have heard the common myth that dogs see the world in black and white. But the truth is they can distinguish certain colors—just not the rich rainbow that we know. Studies suggest dogs best see shades of yellow, grey, and blue.

The cause of color blindness in dogs

Ready for a quick science lesson? As you may recall from your high school anatomy class, human eyes contain two main cell types: Rods perceive light and motion, and cones detect colors. This is true for most other mammals (including dogs), too. But the number of rods and cones vary significantly among species.

Humans are trichromats, meaning our eyes have three types of cones—allowing most of us to see a wide spectrum of colors. Dogs, on the other hand, have only two types of cones, resulting in dichromatic vision and a smaller range of discernable colors.

As a trade-off, their eyes have more rods, which help them detect subtle or distant movements and see in the dark better than we can. (That’s a pretty useful skill when your key responsibilities include pest control and hunting, as has been the case for many dogs throughout history.)

Did you know? People can also be colorblind. In fact, about 8% of men and 0.5% of women have some form of color blindness. But in humans, the condition is typically due to inherited genetic mutations.

Dog eyes also have the tapetum layer—which reflects light back through the retina—and larger pupils, enhancing their night vision ever further. Plus, they can see more at one time thanks to wide-set eyes that provide a broader span of peripheral vision.

How dogs see the world

You might be wondering, “If dogs can only see yellow, blue, and grey, what do other colors look like to them? The green lawn, that red ball, those purple flowers…”

Well, the good news is that your pup certainly still sees all those things. The colors just aren’t quite the same as how you perceive them. For example, greens and reds might look like varying shades of an anemic, greyish yellow, whereas purple could appear to be blue.

The takeaway? Opt for toys that come in bold yellows and blues. Your dog will probably find them more appealing. Plus, they’ll be less likely to get lost among the lawn.

Fun fact: In canine agility sports, dogs perform best when obstacles are either blue or yellow (or both)—likely because they can see those most clearly.

In addition to being a little less vibrant, the world your dog sees is also fuzzier around the edges. Research suggests dogs are fairly nearsighted—having as little as 20% the visual acuity of humans.

But don’t worry about them missing out. They sense the world quite powerfully in ways we can’t. For example, experts estimate that your dog’s nose is 10,000 to 100,000x more accurate than yours. (Can you even imagine?) That allows them to detect phenomena you’d never expect to identify by smell—such as a person’s emotional state. Coupled with sensitive ears, such a sniffer essentially gives your dog superpowers.

Rest assured, they ultimately “see” much more than humans do.

Want to know more about your dog’s eyes?

To help you plan for your pup’s needs, the Wisdom Panel™ Premium dog DNA test screens for dozens of genetic eye disorders—including various forms of retinal atrophy and degeneration.