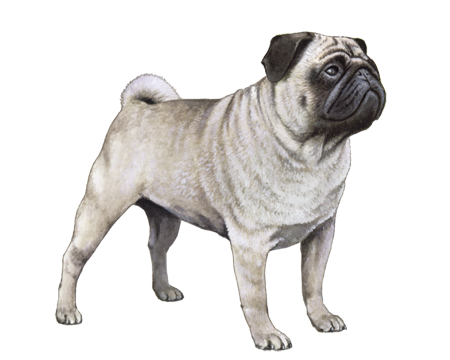 Pugs are small, muscular dogs known for their mischievous, loving dispositions. These easy-to-train dogs are equally happy playing fetch as curling up for a nap—and their good-natured personalities make them a favorite with children. 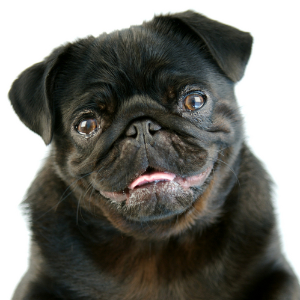 The Pug is an ancient breed that dates back to at least 1122 B.C.

Pugs have had many fans over the centuries, starting with the Emperor of China and members of his Imperial court, who preferred flat-faced, small dogs. Tibetan monks also kept Pugs as pets in monasteries.

Despite being bred as lapdogs—not working dogs—Napoleon's wife, Josephine, relied on her Pug to transmit messages during her imprisonment.

In the 1500s, sailors with the Dutch East India Trading Company started bringing Pugs back to Holland. Once, a Pug saved the life of the Prince of Orange by alerting his camp that Spanish troops had come to attack. After that, the breed became the official dog of the royal House of Orange.

Over their long histories, Pugs have been called several names, including Mophonds in Holland, Lo-sze in China, Mopsi in Finland, and Doguillo in Spain.

Pugs are compact and well-muscled, with strong, thick bodies and an expression best described as lustrous and full of fire.

Pugs have fine, smooth, soft coats with a glossy appearance. The breed comes in two colors—fawn and black. Clearly defined markings include a black mask and back trace (a line extending from the back of the skull to the tail). 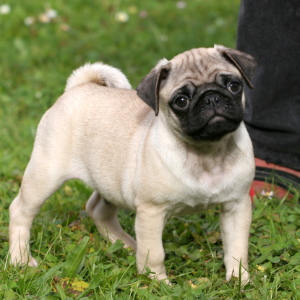 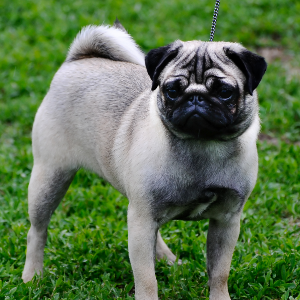 Pugs are even-tempered, outgoing, loving, and affectionate—all of which make them popular with families. The breed is known for being both calm and playful. Pugs are happy to romp with children and other pets or curl up on the couch for a nap.

Adaptable by nature, Pugs can live in an apartment in the city or a farmhouse in the country. They're also comfortable being the only pets at home or part of a pack. The most important thing for Pugs is to spend time with their family. These pups don't like being left alone for long periods.

Pugs require a high-quality dog food appropriate for their life stage (e.g., puppy, adult, senior) and breed size. Their square stature and couch potato tendencies put Pugs at high risk for obesity. Measure out their portions and limit treats to no more than 10% of their daily calories to help keep their weight in check.

Pugs don't require extensive grooming, but their short coats do shed. Brush them with a medium-bristled brush or grooming mitt to remove dead hair—especially during shedding season. Pugs are a low odor breed and don't need baths unless they get into something stinky.

Keep their nails short by regularly clipping them, and clean their ears to help prevent infections.

Like all dogs, Pugs require regular dental care, including at-home teeth brushing and professional dental cleanings. Maintaining good dental hygiene is important for their overall long-term health. The sooner you get them into a good dental care routine, the better.

Pugs love a good nap. But they also need regular walks or playtime to stay healthy and prevent weight gain. Exercise is also an opportunity for bonding, and there's nothing Pugs enjoy more than quality time with their family. Games like hide-and-seek or fetch offer exercise and interaction. Pugs also enjoy activities such as agility, rally, or competitive obedience. And their dog-friendly personalities make them ideal companions at the dog park.

Pugs, like other short-faced breeds, are prone to overheating and shouldn't do any strenuous activities during hot weather. In the summer, play games indoors or offer puzzle toys to keep them moving. Their stout frames also make Pugs weak swimmers, so keep an eye on them if they're around water.

Pugs are eager to please and generally easy to train, but they also have a stubborn streak. Because they're food motivated, offering a few treats during training can help them master basic commands and new tricks. Pugs are sensitive and don't respond well to harsh training methods. Praise and other positive reinforcements are the way to go with these pups.

An outgoing breed, Pugs are always looking for a chance to charm people and pets. Early socialization will help them be well-mannered dogs wherever they go. 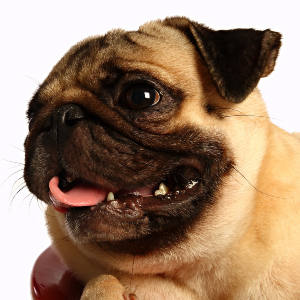 Knowing if your Pug is a carrier or at-risk for these conditions can help you and your veterinarian plan for your pup's lifelong care. With Wisdom Panel™ Premium, you can get results for over 200 genetic health tests.