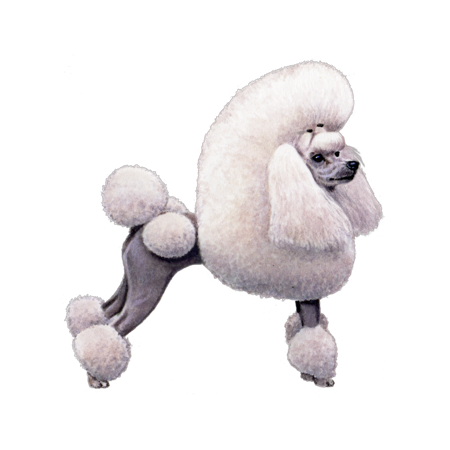 At first glance, Miniature and Toy Poodles may not look like natural-born athletes. But don't let their small size fool you. They are every bit the running, jumping, swimming dogs as other breeds in the sporting group. They just fit on your lap better after a full day of fun! 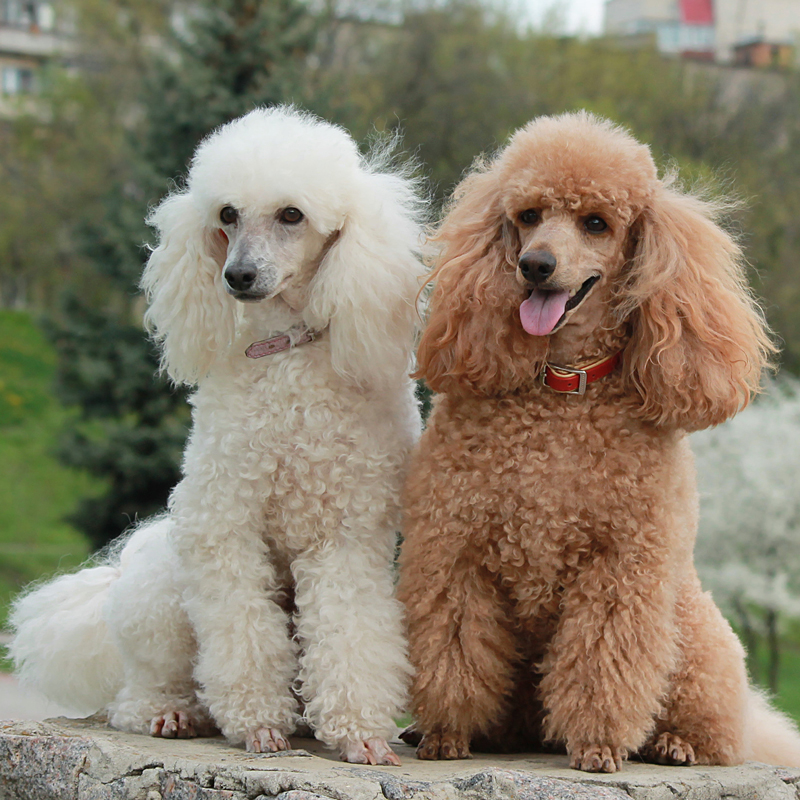 Miniature and Toy Poodles are small versions of the Standard Poodle. So, their history begins with that of the original Poodle breed.

Despite their strong association with the country, Poodles didn't originate in France. Some experts believe they originated in Central Europe or Russia, whereas others think they got their start in Spain or Portugal. Another popular theory is that German soldiers brought the Poodle to France during the 1400s.

That explains their name, but what about their famous haircut? Well, hunters knew that Poodles would be more efficient swimmers if they had less hair. But less hair would leave them more vulnerable to the cold water. So, creative Poodle owners had an idea. They shaved most of the dog's body but strategically left puffs of hair to protect joints and vital organs from the cold. Problem solved.

In the 1700s, owners bred Standard Poodles down to a smaller size, creating the Miniature Poodle. Then in the early 20th century, people were looking for a petite dog that would be well-suited for city life. And the Mini Poodle gave way to the Toy Poodle.

The Poodle is an elegant, well-proportioned, breed with a frizzy and curly coat.

The Poodle's dense coat can be curly (frizzy curls over the whole body) or corded (even cords that hang in varying lengths). Poodle owners often give their pups stylized haircuts or a "puppy clip" that trims hair to an even length over the whole body.

Poodles have dark, oval-shaped eyes that offer an alert, intelligent expression. Covered in long, wavy hair, the ears are long enough to reach the corner of the lip when pulled forward. 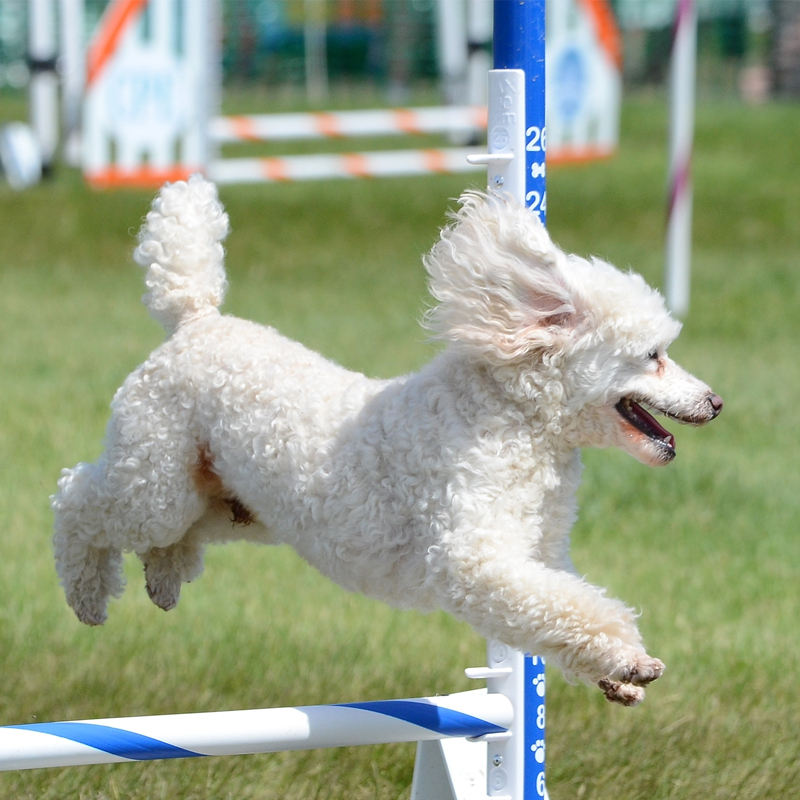 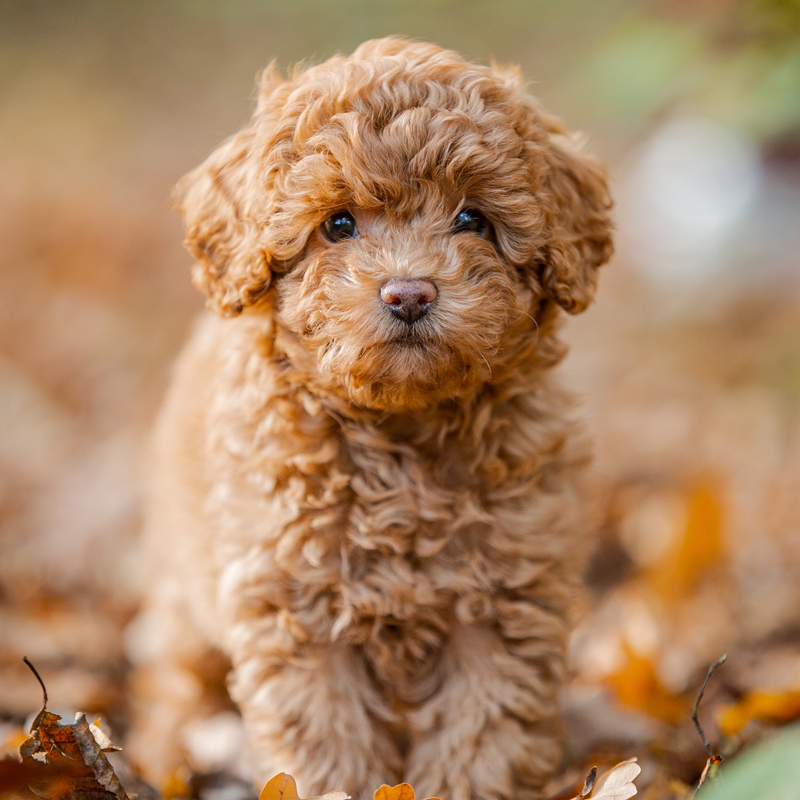 Mini and Toy Poodles are incredibly smart, playful dogs that are perfect for people who want a "big dog" personality in a small (and adorable) package. They make great apartment dogs and get along well with dogs, other pets, and kids.

Poodles love people and form tight bonds with their families. And because of their sensitive nature, they even pick up on the moods of people they're close to. Such intuition—coupled with their willingness to please—makes these little pups great assistance and therapy dogs.

Poodles may tend to bark, and some are reserved around strangers. Early socialization can help prevent these and other undesirable behaviors.

Small dogs like Mini and Toy Poodles have little stomachs that don't allow them to eat big meals. So, it's best to break their food up into several small meals throughout the day.

Beyond that, they thrive on high-quality dog food formulated for their life stage (e.g., puppy, adult, senior). And a diet created for small-breed dogs will have the appropriate blend of nutrients and a smaller kibble size that helps them properly chew and digest their food. Foods developed specifically for Poodles are another great option to consider.

To prevent your Poodle from becoming overweight, keep a close eye on their food portions. And be sure to take treats into account when tracking their daily calorie intake. Even a couple of treats can add up to a lot of extra calories for a small Poodle. As a guideline, treats should make up no more than 10% of a dog's calories.

Poodles have hair instead of fur. That means—unlike fur coats that grow to a point and then shed—a Poodle's hair keeps growing. Similar to human hair, this breed's hair does still fall out. But it usually falls back into their coats (instead of all over the house). Because of this minimal shedding, Poodles may be a good choice for people with allergies.

Though Poodles don't shed a lot, their coats still need regular grooming. To keep their hair free from mats and tangles, brush a few times a week. And because their hair grows continuously, plan on haircuts every month or so.

Miniature and Toy Poodles are particularly at risk for dental issues due to their small mouths and crowded teeth. So, regular dental care—including at-home teeth brushing and professional dental cleanings—is critical. These pups may require more frequent cleanings beginning at an earlier age compared to other breeds.

A very active breed, the Poodle enjoys many of the same activities other dogs in the sporting group do. Long walks, jogs, agility, retrieving, rally, and swimming are fun ways for a Poodle to burn off energy. Or for something a little different, try musical canine freestyle—a mix of obedience training, dance, and tricks.

Poodles are very bright dogs, and therefore easy to train. Because they're so responsive and eager to please, reward-based training using treats or favorite toys is the best approach with these pups. 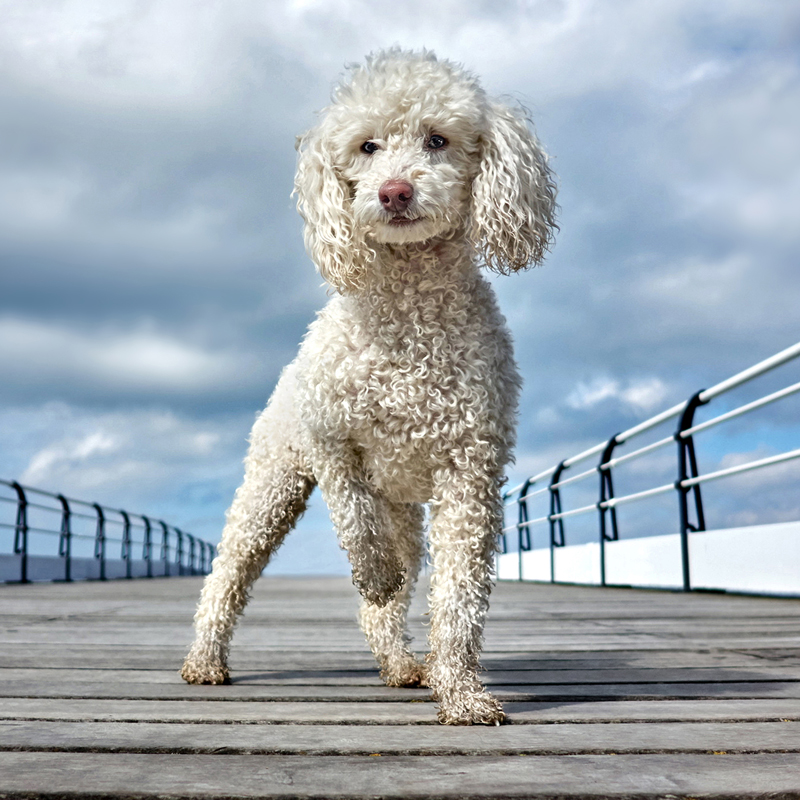