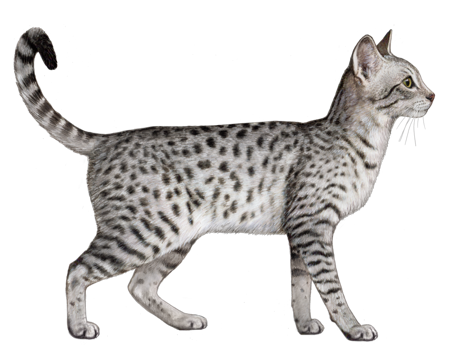 Worshipped by ancient Egyptians for centuries, Egyptian Maus turn heads with their exotic-looking spotted coats. But it's their intelligence, loyalty, and devotion that stand out to those who know them best.

The Egyptian Mau is an old breed that originated, as the name suggests, in Egypt. Spotted cats resembling the Mau appear in frescoes dating back as far as 1550 B.C.

Details of the breed's origins aren't entirely known. But an analysis of cat mummies found in Egyptian tombs suggests the Mau descended from a subspecies of African Wildcat that migrated from Ethiopia.

One thing we know for sure is that Egyptian Maus were worshipped as deities and revered by royalty. Historical accounts report that family members mourning a Mau's death would shave their eyebrows as a sign of grief and bury the cat in linens and jewelry.

The modern Mau gained some popularity in Europe, but World War II took a toll on the cat fancy. The Egyptian Mau breeding program suffered, and after the war, Maus were in danger of becoming extinct. Fortunately, Italian breeders took it upon themselves to preserve the breed.

A Russian princess imported the first Egyptian Maus from Italy to the United States in 1956. Those three cats became the foundation of the American breeding program. And in 1977, the CFA granted the breed Championship status.

Egyptian Maus are medium-sized cats with well-developed muscles and an alert appearance. They often strike statuesque poses that show off their elegant, graceful bodies. They're also the only naturally spotted breed of domestic cat.

Maus come in smoke, silver, and bronze—as well as dilute versions of those colors. A great contrast exists between their body color and spots, and their markings can be any shape or size but should not run together. Fittingly, they have an "M" marking on their foreheads and a dorsal stripe that travels the length of their spines.

The Mau's coat is medium-length with a lustrous sheen. Smoke-colored cats have fine, silky hair. On the other hand, silver and bronze cats have dense hair with two or more bands of ticking.

Maus have large, green, almond-shaped eyes that slant slightly towards the base of their ears, giving them a worried expression. Dark "mascara" lines start at the outer corner of their eyes and continue along their cheeks. Their ears are medium-to-large, broad at the base, and slightly flared, and their medium-long tails are heavily banded and dark at the tip. The breed walks with a trademark "tiptoe" stance because the hind legs are longer than the front.

Egyptian Maus are people-oriented cats and fiercely loyal to their humans. They form tight bonds with their family members and like to shower them with affection. But they have firm opinions about who can handle them and when. They can be standoffish with strangers and may take some time to warm up to other pets.

This incredibly agile and athletic breed can jump six feet high from a standstill and run up to 30 miles per hour. So, daily exercise and play sessions are essential—and there are plenty of ways to help them release their pent-up energy. Maus are very spirited and enjoy running around the house, fetching, and walking on a leash. Should they get tired, you might find them hitching a ride on their favorite person's shoulders.

Egyptian Maus need a high-quality diet. Because nutritional needs vary for kittens, adults, and senior cats, opt for a formula that's age-appropriate for your pet.

To keep your cat at a healthy weight, measure out meals and reduce portions if necessary. And don't forget to account for treats. As a guideline, they should make up no more than 10% of a cat's calories.

Lastly, all cats need access to fresh, clean water around the clock.

Egyptian Maus have low-maintenance coats. Weekly brushing is all it takes to keep their coats looking shiny and healthy.

No grooming routine is complete without a little dental hygiene. To support your Mau's overall health, brush their teeth daily and schedule visits with your veterinarian for professional dental cleanings and exams.

Some breeds are more susceptible to certain health conditions. Egyptian Maus may be prone to urolithiasis (stones in the urinary tract) or leukodystrophy (a neurological disease). Your veterinarian is the best source for information about these and other feline health disorders.