Boxers are intelligent, hardworking, and good-looking dogs. They are very loyal and affectionate to their family, as well as playful and gentle. This makes them great with children. So, it's no wonder that the Boxer has earned a reputation as one of America's most popular dog breeds. 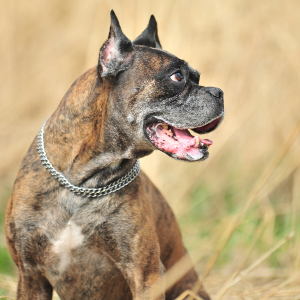 The history of the Boxer dates back to 19th century Germany. Now extinct, ancestors of the Boxer included the Bullenbeiszer and the Barenbeiszer, which were used for hunting deer and boar. The crossing of these breeds with the English Bulldogs of the 1830s resulted in the Boxer as we know it today.

Boxers were bred to be hunting dogs, and they earned their name from the boxing pose they take when standing on their hind legs. Later in the breed's development, they also gained some ability for herding.

Over the years, Boxers have taken on many roles. These include athlete, cattle dog, police dog, war dog (in both World Wars I and II), watchdog, protection dog, and guide dog for the blind. They were also used for dogfighting and bull-baiting until those activities were outlawed. And circuses even used Boxers for their ability to learn tricks quickly and perform them on command.

The popularity of Boxers started to increase rapidly in the 1860s when the German Boxer Klub was founded. At the turn of the 20th century, the Boxer made its way to the United States, and the American Kennel Club officially recognized the Boxer in 1904.

The Boxer has a rippled, muscular look. Their dark brown eyes and wrinkled forehead contribute to their alert and curious expression. A well-shaped head and a broad, blunt muzzle are common characteristics of the Boxer. The breed's stride is like that of an athlete: sleek and effortless, with a powerful forward thrust.

Boxer coats can be fawn or brindle with white markings. The breed doesn't do well in freezing weather due to its short coat.

Boxers are medium-sized and sturdy. They can be stocky or lean with a short back, sturdy limbs, and a short coat that shows off their bodies' contours. The well-developed muscles of the Boxer are clean, hard, and appear smooth under taut skin. 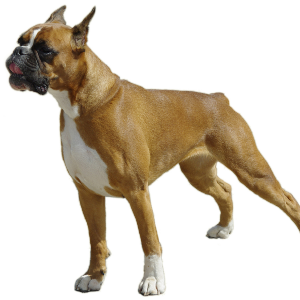 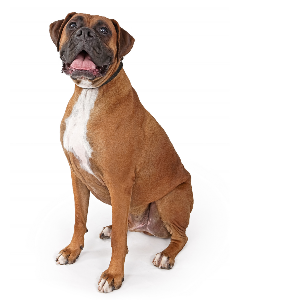 The upbeat Boxer is very active, playful, and curious. It has a gentle nature and is good with other animals. Known to paw at their toys and food, Boxers can be expressive of their needs and temperament.

A very protective breed, Boxers make excellent watchdogs and family guardians. Yet, they are typically friendly toward strangers. To promote their social development, you should expose them to various people and other animals in early puppyhood.

Boxers are incredibly energetic and powerful even as puppies. So, bringing one into a home with young children or elderly adults may be unwise.

Boxers require a high-quality dog food that is age-appropriate—whether it's commercially manufactured or homemade (with a veterinarian's supervision and approval). For puppies, experts recommend a food formulated for large breeds.

Boxers tend to stay at a healthy weight. But it's still important to monitor the amount of food you give your Boxer and reduce portions or restrict calories if your pup gains weight. Also, remember that giving too many treats in addition to regular meals can cause obesity.

The short, shiny coat of the Boxer is relatively maintenance-free and requires little grooming. Shedding an average amount, Boxers are clean dogs that only need an occasional bath. Once or twice a week, brushing your Boxer with a rubber curry-brush or a hound glove will help keep them looking their best.

As a high-energy and playful dog, the Boxer needs plenty of exercise every day—whether it's on a leash, in your yard, or in the park. It's not a good idea, however, to let them run loose.

A brilliant breed, Boxers are quick to learn but can be both sensitive and stubborn. They love to jump, and when trained, their skills as guards, military dogs, and watchdogs are outstanding. But Boxers can get restless if they don't receive enough exercise.

Because they are hardwired to jump and leap about, Boxers need constant reminders when young to stay down. They really do best with firm owners who use reward-based training, set limits, and maintain control.

Socialization and puppy training classes should start early to help channel the Boxer's energy. These dogs are highly intelligent and tend to hate repetition. So, offering a wide range of canine activities and mental stimulation that involve obedience, agility, and herding skills will help them be their best.

Boxers are top-notch service, assistance, and therapy dogs, and they serve well in drug detection and search-and-rescue roles.

Knowing if your Boxer is a carrier or at-risk for these conditions can help you and your veterinarian plan for your pup's lifelong care. With Wisdom Panel™ Premium, you can get results for over 200 genetic health tests.