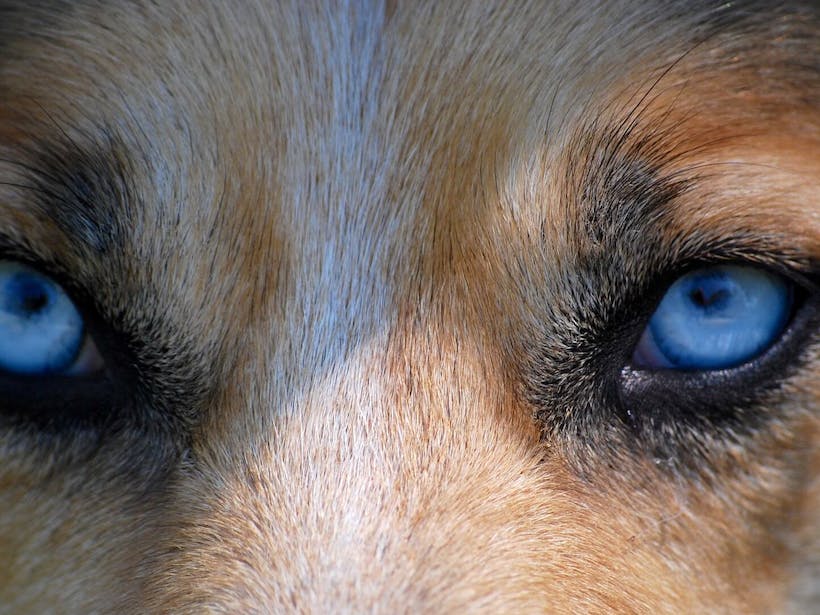 From diamonds to original works of art, that which is scarce often wins our attention and affection. Blue-eyed dogs certainly fall into this category. But what makes them so uncommon?

A trick of the light: Caused by a lack of melanin, blue eyes don’t actually have any blue pigment. So, why do they appear to be blue? When light enters the eyes, particles in the stroma layer scatter it and reflect some of the blue wavelengths back out. (A clear sky looks blue for similar reasons.)

As with most physical traits, DNA strongly influences a dog’s eye color. Let’s dig into the specifics of a few known genetic causes of blue eyes in dogs.

Many people associate blue eyes with the Siberian Husky. And that’s not a coincidence.

Huskies are more likely than most pups to carry a variant in the ALX4 gene that causes blue eyes. Because this is a dominant trait, dogs with just one copy of the variant may have blue eyes.

That said, the trait is still quite rare. In our DNA testing, we’ve found only about 5% of dogs to have the blue eye variant.

Why do some dogs have only one blue eye?

Genetic variants don’t always affect both eyes. As a result, dogs can end up with one blue eye and one eye of a different color. This trait is called heterochromia iridis, but it goes by many other names—including “odd eyes,” “split eyes,” and “broken glass eyes.”

The white spotting or piebald variant

In dogs, white spotting (AKA, “piebald”) appears to come from a localized lack of pigment, as white is not actually a color. A gene variant of MITF—the most common known genetic cause of piebald coloring—often results in white spots in the coat and sometimes a partially or fully pink nose, pink eye rims, and blue eyes.

Breeds that may have blue eyes due to the piebald variant include:

Note: Because pigment is critical to the development of sight and hearing in dogs, we typically see color around the eyes and ears—even if nowhere else. So, blue eyes caused by the piebald variant tend to occur only in mostly white dogs that carry two copies of the piebald gene. Such dogs are also much more likely to be deaf in one or both ears.

You might be familiar with merle patterning, which is when a dog’s coat has random splotches of black, silver, brown, beige, and/or white. But did you know the genetic variant that creates this signature coat coloring can also cause blue eyes?

Many breeds (especially in the herding group) carry this trait, including:

As with the MITF variant, merle has some known associated health risks.

When dogs who are both carriers of the merle gene breed, some of the resulting puppies may inherit two copies of the merle gene. These “double-merle” pups are often completely white, born blind and deaf, and may have abnormally small eyes (i.e., microphthalmia) or abnormal irises (i.e., iris hypoplasia). For these reasons, it’s widely considered inhumane to breed two merle carriers.

Want to test your pup for the merle variant before breeding them? All Wisdom Panel™ dog DNA tests screen for it—along with dozens of other traits. And that’s just where the benefits begin. Learn more →

Other causes of blue eyes in dogs

Though genetic variants are the most common cause of blue eyes, there are a few other reasons you might see some blue hues in your pup’s peepers.

All puppies have blue (or bluish) eyes when they first open them. But by the time they’re about 16 weeks old, their eyes change to their true color—typically brown. So, if you’ve got a young, blue-eyed pup at home now, keep in mind their eye color may change.

Albino animals can’t produce pigment and are incredibly rare. (We’ve identified albinism in less than 1% of dogs we’ve tested.) Because they have little or no melanin, albino dogs typically have pale blue or green eyes.

Health conditions that may cause bluish eyes

Several eye conditions—including cataracts, glaucoma, corneal dystrophy, and anterior uveitis—change the composition of a dog’s eyes, giving them a cloudy, grey-blue appearance. This is a rather distinct look that’s unlike the crystal blue you might see in the eyes of a Husky.

These eye conditions usually arise from old age, injury, or disease. Left untreated, many of them may lead to blindness or reduced sight. So, if you notice your dog’s eyes gaining a bluish tint later in life, be sure to consult your veterinarian.

Want to understand what makes your dog look the way they do?

From blue eyes to bushy tail, every dog displays traits that are unique to them. Unravel the mysteries of your pup’s appearance, and dig into the “why” behind their coat type, eye color, body shape, ideal weight, and more.