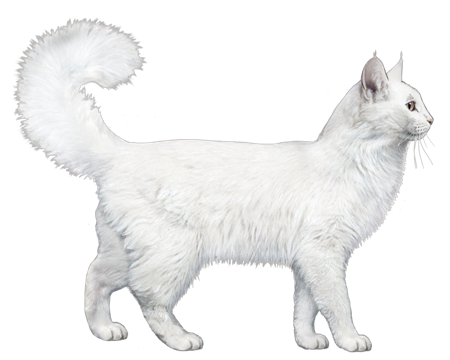 Turkish Angoras are regal, extroverted cats famous for their intelligence and athletic abilities. When they're not busy supervising their humans, they like to spend their time perched in a window or playing with their favorite toys.

As the name implies, the Turkish Angora originated in Turkey. In the 16th century, the city of Ankara (formerly Angora) was home to several animals with long, delicate, silky hair—including goats, rabbits, and what many people believe to be the first longhaired cats.

Turkish Angoras quickly caught the attention of European cat fanciers. But when Persian cats gained popularity in the early 1900s, breeders began using Angoras primarily in their Persian breeding programs. As a result, Angoras nearly disappeared as a distinct breed. Fortunately, the Ankara Zoo set out to save this beautiful breed. They developed a breeding program that focused on preserving cats with white-colored coats and blue, gold, or odd eyes.

For years, Turkish Angoras mostly remained in their native country. But when American soldiers reported seeing the breed at the Ankara Zoo, interest began to grow in the United States. The zoo resisted exporting the cats at first. It wasn't until 1962 that they released a breeding pair to Colonel and Mrs. Walter Grant. The resulting litter became the foundation of the Angora breeding program in the U.S.

The Cat Fanciers Association accepted white Angoras for Championship competition in 1972, followed by colored Angoras in 1978.

Turkish Angoras are medium-sized cats with a balanced, graceful appearance. They are slender yet muscular, with long legs and a gorgeous, shimmering coat.

The Angora's semi-long coat has a soft, fine texture and silky sheen. The hair is longest on the tail and ruff, and the breed has visible britches on the hind legs. White is the most popular color for Angoras, but they come in many traditional colors and patterns.

Angoras have small-to-medium-sized wedge-shaped heads topped with large, tufted ears. Their almond-shaped eyes can be blue, green, green-gold, amber, or odd-eyed (one blue and one green, green-gold, or amber). They have long, graceful necks, slender, muscular bodies, and long, tapering tails.

Turkish Angoras are outgoing, clever cats that want (scratch that, need) to be involved in everything their humans do. They'll follow their people around during the day to supervise activities and snuggle up under the covers with them at night. And they expect their families to be just as devoted to them in return.

These active, agile cats have one speed: fast. They enjoy racing around the house, chasing toys, and fetching objects. Their kitten-like playfulness never goes away. They're always up for some fun.

And if ever you can't find your Angora, look up. Chances are they've scaled to the top of a door or perched themselves high on a bookshelf. This athletic ability, combined with their intelligence, makes them well-suited for feline agility.

Angoras will happily cohabitate with dogs and other pets—as long as all understand that they are in charge.

Turkish Angoras are energetic cats that require a high-quality diet to meet their nutritional needs. Because those needs differ for kittens, adults, and senior cats, opt for a formula that's age-appropriate for your pet.

Even an active cat like an Angora is at risk for obesity if they overeat. To keep calories in check, measure out meals and reduce portions if necessary. And don't forget to account for calories from treats in your cat's daily totals. As a guideline, treats should make up no more than 10% of their calories.

The Angora's coat rarely tangles or mats. And because they don't have an undercoat, shedding is minimal. An occasional brushing is all that's needed to keep them looking their best.

No grooming routine is complete without a little dental hygiene. To support your Angora's overall health, brush their teeth daily and schedule visits with your veterinarian for professional dental cleanings and exams.

White Angoras may be prone to full or partial deafness. A brainstem auditory evoked response (BAER) test can evaluate your cat's ability to hear. If the results show hearing loss, your veterinarian or an animal behaviorist are great resources for advice on raising a hearing-impaired pet.