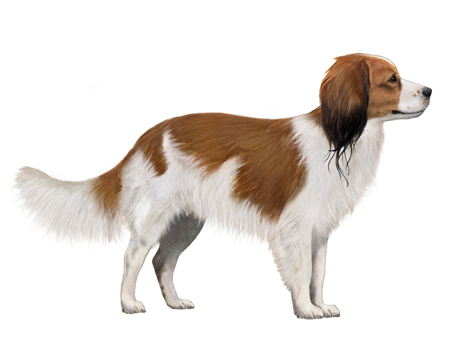 The Nederlandse Kooikerhondje is a spirited, trainable breed that excels at agility, obedience, and hunting. Known as the "little white and orange dog with a big heart," the Kooikerhondje is a natural fit for families wanting a high-energy, loyal pet. 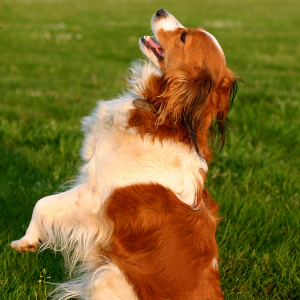 The Nederlandse Kooikerhondje—pronounced "KOY ker hond yeh"—is an old spaniel breed that came out of the Netherlands in the 17th century. Kooikers primarily functioned as decoy dogs for duck hunting, which is how they got their name. The breed name translates roughly to "little caging dog," most likely a reference to "eendenkooi "(a cage to trap ducks).

When the popularity of decoy duck hunting declined after World War I, so did the need for the Kooikerhondje. As a result, the breed nearly went extinct. But in 1939, the Baroness Hardenbroek van Ammerstol set out to preserve the Kooiker in protest of the occupation of the Netherlands. She located a single male and two female Kooikers from the north of the country and began a breeding program. By 1945, her efforts resulted in 25 known Kooikerhondje.

The Dutch Kennel Club, Raad van Beheer, officially recognized the Kooiker in 1971. Though it's growing in popularity in the United States, Canada, and the United Kingdom, the Kooiker is still a rare breed.

Today, the Kooikerhondje supports the conservation of the Netherlands' native wetlands and culture by helping trap waterfowl for banding and identification.

The Kooiker's medium-length coat can be slightly wavy or straight. Though soft, it's textured enough to be weather-resistant. The coat is orange-and-white spotted, with black shading (sable).

The Kooikerhondje has almond-shaped, dark brown eyes and a friendly, alert expression. Feathering on the ears gives the impression of earrings. The tail is well-feathered with a white plume and curls upward when walking. 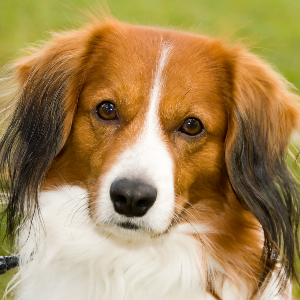 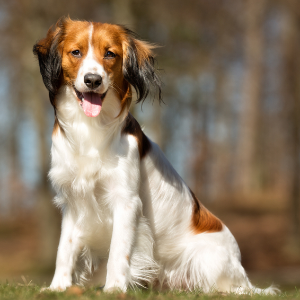 Kooikers are happy, well-behaved dogs that love spending time with their people. Because they tend to be fairly quiet, Kooikerhondjes are a good breed for apartments or homes with small yards.

Kooikerhondjes can be reactive around other dogs, especially when on a leash. And dog parks are not generally a good fit for them. To help your Kooiker become a well-mannered dog, start socializing them early.

As long as they get plenty of physical exercise and mental stimulation, Kooikerhondjes make easy-going, good-natured, affectionate companions. But they may be slow to warm up to strangers.

Kooikerhondjes need a high-quality diet that's appropriate for their life stage (e.g., puppy, adult, senior) and activity level. To prevent them from becoming overweight, keep a close eye on their food portions. And be sure to take treats into account when tracking their daily calorie intake. As a guideline, treats should make up no more than 10% of a dog's calories.

Kooikers are very low-maintenance when it comes to grooming. Simply brush them once a week, and occasionally trim the hair around their paws. Because their coats naturally repel dirt, baths are rarely necessary.

Kooikerhondjes' long ears are more susceptible to ear infections. So, check and clean your dog's ears routinely to prevent infections. Your Kooiker's nails may wear down during daily activity. But you should still trim them periodically to prevent pain and other problems that arise from overly long nails.

Kooikerhondjes' intelligence and eagerness to please make them a very easy breed to train. Because of their determined nature, a firm attitude and positive reinforcement are the best training methods to use. To hold their interest, keep sessions fun and short. 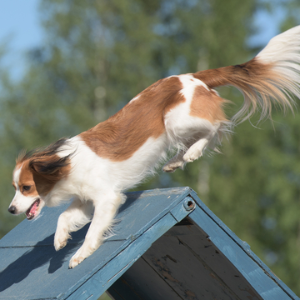 Knowing if your Kooikerhondje is a carrier or at-risk for these conditions can help you and your veterinarian plan for your pup's lifelong care. With Wisdom Panel™ Premium, you can get results for over 200 genetic health tests.