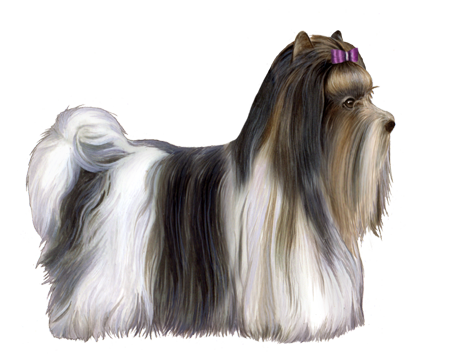 This small breed is intelligent and devoted, and they make great companions for families. They can be mischievous, but they quickly make friends with any people they meet, as well as other dogs and animals.They are mellower than other terrier breeds, and while they do still require some exercise and mental stimulation, a game of fetch or short walk is plenty for the Biewer. 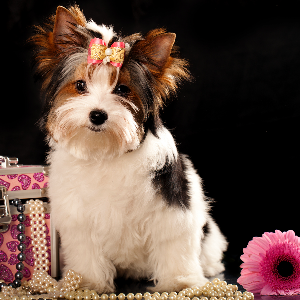 The Biewer Terriers are a breed named after the couple that started their line: Werner and Gertrud Biewer. The Biewers loved their animals, and throughout the 1970s and into the early 1980s, they had a successful Yorkshire Terrier breeding program. On January 20, 1984, the first documented black, white, and tan Yorkshire puppy was born into their pack, and three months later, another arrived. These rare puppies possessed the piebald gene not usually found in Yorkies.

Because of their popularity, the Biewers couldn’t keep up with the business of breeding their namesake terriers, though other breeders have worked to replicate the same type of dog.

Since this is a relatively new breed, there are no specific standards for the Biewer Terrier.

The Biewer Terrier has an elegant, longhaired coat that parts down the middle. They have a level back, with a high-set, plumed tail.

The Biewer Terrier has a long and flowing coat that’s silky in texture. Their coloring comes in any combination of black or blue with gold or tan, as well as white.

This breed is known for its long, silky, flowing coat, but it was the coat’s color that caught the attention of the original Biewer breeders, Mr. and Mrs. Biewer. These rare puppies possessed the piebald gene—not usually found in their ancestor, the Yorkie—and it exhibited itself as a black, white, and tan dog. Today, the breed continues to have a unique color scheme, including blue/black, gold/tan, and white. 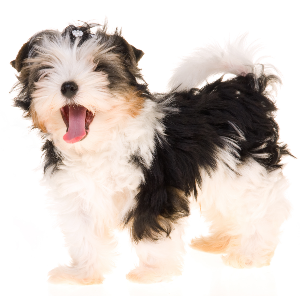 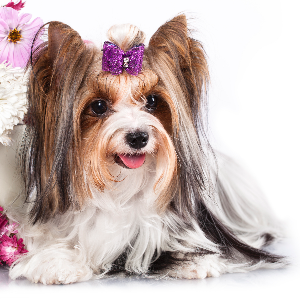 The Biewer Terrier is a real companion dog. Although they have a mischievous, childlike curiosity, they are relatively easy to train, and they tend to be mellow and easygoing, which makes them an excellent option for families.

They get along well with other animals, and their fun-loving attitude is easy to love.

The Biewer Terrier does best with high-quality dog food that’s suited to their particular age, as well as any additional health concerns. Consider a small-breed food for this breed.

As with any dog, it’s important to monitor the amount of food and treats that you give your Biewer Terrier, especially since some dogs may be prone to gaining weight as they age. Your veterinarian is always a good source to help provide you with appropriate nutrition and feeding guidelines.

The Biewer Terrier’s long, silky coat requires more care than other terriers. Daily brushing should help keep mats and loose hairs at bay. You can also keep your Biewer’s coat shorter, which will require less care.

All dogs require regular dental care, including at-home teeth brushing and professional dental cleanings, and the Biewer Terrier is no exception. Maintaining good dental hygiene is important for their overall long-term health.

These small dogs are easy-going, including when it comes to their exercise routine. Unlike other terriers, they tend to be pretty mellow, and a game of fetch or short walk will be plenty to keep them healthy and happy.

Dedicated, loyal, and smart, the Biewer Terrier is both easy to please and train. 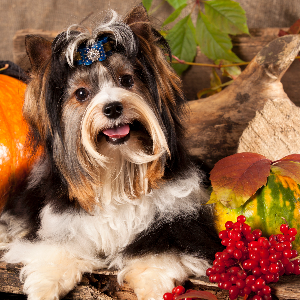 Knowing if your Biewer Terrier is a carrier or at-risk for these conditions can help you and your veterinarian plan for your pup's lifelong care. With Wisdom Panel™ Premium, you can get results for over 200 genetic health tests.